“Naked lady paintings!” said Ty.
“Nudes, idiot! They’re nudes—” said Steve.
“Boys! I can hear you. Knock it off!” Mr. James always called Steve and his friends "Boys". They had accepted the possibility that he did not know their individual names.
Steve, John, DeShawn, and Ty sat at the back of the bus, as far away from their fifth grade class as possible. They didn’t care about the field trip. They just wanted to swear and tell dirty jokes.
After Mr. James’ reprimand, they quieted, but only for a few minutes. They couldn't help getting riled up and making trouble.  That's what they did.
"If Mr. James were smart he'd separate us," said Ty.
"He won't!" said Steve, while shooting a rubberband at the girl he liked. She stuck out her bright blue, candy-coated tongue at him.
The boys began flicking each other’s ears and then the ears of other students sitting nearby on the bus.
"Ow!" cried one fourth grader.
"Oh, come on! That didn't hurt—"
"Boys!" Mr. James turned in his seat.
"—but this will." Steve flicked the kid again, making him whimper.
"What a baby," said DeShawn. Everybody laughed.
Mr. James stood. “What did I just say?” His face was beet red.
“Oh, shit! Oh shit!” said DeShawn. "He's coming. He's gonna kill us." The boys instinctively slumped their shoulders to look smaller and more vulnerable.
It took Mr. James a while to stumble and lurch his way to the back of the bus. When he arrived, each boy acted terrified. Mr. James said nothing. He shoved Steve toward the window and sat down next to him. The seat creaked. Steve avoided eye contact.
The school bus stopped at a light on Jefferson. Steve looked out the window and saw a bench piled with blankets. He knew there was a homeless person underneath the pile. A boarded up building sat a little ways off the road in a weed-ridden parking lot. It had a peeling sign that read: Ling's Chinese American Restaurant. Steve shifted his gaze to the sky. He craned his neck and shielded his eyes in order to focus on the rolling clouds.
Steve must have fallen asleep because the next thing he rememebred was stepping off the bus and entering the museum. He heard someone say, “Welcome to the Detroit Institute of Art. This way.”
The DIA was a place Steve had never visited. Why would he? It wasn't the mall, the arcade, a friend's house, or even the roller rink. It seemed like a boring place filled with old, untouchable stuff—nothing video game or dinosaur related—and there was no food and there were "No Food Allowed" signs all over the place.
The class walked up a set of stairs and assembled in a cavernous hall with a polished stone floor. A docent introduced herself. She began talking rapidly about the building, its history, and the artwork the class would see. Her voice echoed around them.
Steve wasn’t paying attention. He was scanning the hall for nude paintings, but didn't see any. What he did see were several doorways leading into other rooms and Mr. James.
"Are we gonna ditch?" Ty asked.
"Not yet. Mr. James is watching us. Look."
Mr. James' beady eyes were trained on the boys. When he made a gesture for them to move along with the rest of the class, his sweaty jowls shook. DeShawn laughed.
"Watch your step and file in," said the docent. "This is Rivera Court. Deigo Rivera painted these frescos..."
Steve stepped into the large room. He looked up. The walls were covered on all sides with a mural depicting factory scenes painted in fading shades of grey, brown, yellow, and red. The colors filled in outlines of men in suits, men in overalls, machinery, so much machinery, and figureheads sifting ore from the earth.
Steve turned slowly, taking in each painted panel. He walked toward the nearest wall, the nearest panel.
Ty tugged on his arm. "Come on!"
Steve brushed him off. "Uh, uh."
A flood of memories came back to Steve. He heard his father and grandfather telling stories about working on the factory floor, working under and above the furnace, feeling the heat. These panels seemed to be an illustrated version of those stories.
Steve thought one of the machine workers looked like his grandfather, whose huge arms could still lift Steve into the air as though he weighed nothing.
“Are these real people?” Steve asked the docent.
“Yes.”
“My grandad and dad work at the GM plant … is this the GM plant?”
"No. This is the Ford plant—”
“Oh, right. You said that. So up there—" Steve pointed at one of the ore panels. "Is that supposed to be the rock you melt to make the car parts?"
"Yes. Very good!" said the docent.
"Which one is iron?”
The docent pointed. She opened her mouth to speak, but Steve interrupted her with another question.
"Who are the nude guys supposed to be?"
Steve's classmates began to snicker and laugh.
"Quiet down," said Mr. James.
Steve realized the kids were laughing at him. He walked over to the docent and Mr. James. “Um, is there a book about this that I can borrow?” he asked.
The docent nodded enthusiastically.
Mr. James said, “Yes, Steve. We'll get one at the end of the tour.”
"Okay. Thanks. So who are the nude guys?" 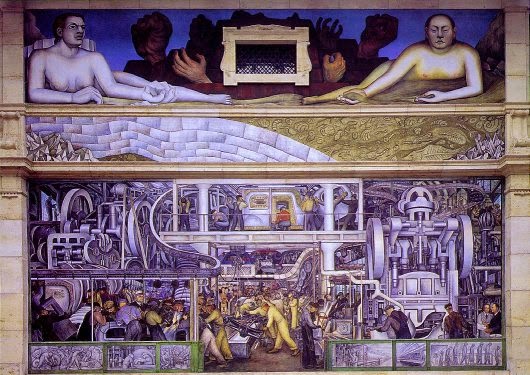 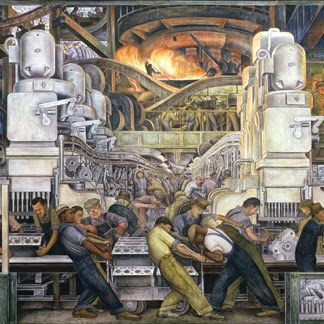