Open letter to Jim Carrey and his eyebrows

If you don't mind my asking, how do you manage to waggle both your left and right eyebrows? I am desperate to learn this trick. I have recently (last night) begun practicing eyebrow waggling, but have had no bilateral success. My right eyebrow is dynamic, but my left is ineffective. It's as if my forehead and brow muscles can only move in one direction.
Any techniques or daily exercises that you could provide would be greatly appreciated! Thank you for your time.

My dad rides the train. For an hour every morning and an hour every night he is on rails. The jostling car, stuffy air, hard seat, and rumbling wheels are daily familiars that can induce sleep. Dad resists by drinking a thermos full of coffee that Mother prepares for him each morning. He says he would be a fuzzy wreck without it.
Dad works for the Chicago, Milwaukee, St. Paul and Pacific Railroad, the same railroad on which he rides as a commuter. His commute usually ends in Chicago, where his office is, but sometimes he continues on to Milwaukee. The railroad travels across the country to Washington state, and in an electrified capacity through Montana and Idaho. But Dad has never traveled beyond Minocqua, where he and Mother honeymooned.
Since all the other passengers know Dad works in the railroad's main office, they often seek him out during their commute to complain. They tell him "the engine is too slow" or "the price increase is too high" or "the industry needs to diversify if it's going to compete." The passengers ask Dad to "talk to someone about it."
"Write it down," Dad replies. He pulls out a Customer Survey card and golf pencil from his briefcase and passes them to the complaining passenger. Upon collecting them he says, "I'll deliver your complaint to the PR Department when I get to work this morning," which seems to make everyone feel better.
Dad says, "Daily travel wears on people. They get to feeling like another bundle and they need to tell someone about it. Nobody likes being a bundle. Nobody likes being another piece of long-distance freight."
On warm days, passengers try to combat the stifling heat by opening the car windows. The locomotive coal ash floats into the cars and coats every surface with fine black powder. The ash collects in the folds and seams of people's clothes. The trick, Dad taught me, is to rise slowly from your seat, and give your clothes one good shake before you disembark, that way the coal won't stick or smudge.

While Mother and I wait at the station, I practice removing coal ash by snapping my shirt like a bed sheet--the rush of air against my skin keeps me cool in the process. I repeat the action over and over, working out the timing to achieve the cleanest snap.
"Settle down," Mother says. "Your father's train will be here any minute."
But sometimes Dad sleeps through the stop--he doens't have a thermos full of coffee with him at night--and we have to chase after the train in our '45 Chevy. That's what we end up doing tonight.
Mother throws the car into reverse, cranks the wheel, throws it into drive, and we take off. In these moments, Mother laughs and shakes her head. Tonight all I can think of is coal ash. If Dad is asleep, he's rubbing his arms together, smudging and smearing soft coal all over his white shirt. Mother will be furious. That's the kind of damage that cannot be undone in the wash.
We catch the train at the next stop. Mother honks the horn to wake Dad. In a second, Dad is standing on the platform. He looks fuzzy and gray, but happy to see us and be off the train.
Posted by M Twiddy No comments:
Email ThisBlogThis!Share to TwitterShare to FacebookShare to Pinterest
Labels: short short

http://everyday-carry.com (EDC) is a website devoted to what one carries on their person every day, if said person is a man-cop-military-man-man. Meticulous photographs fetishizing: impractical knives, stabby pens, watches, woven parachute cord bracelets, dense-looking flashlights, and guns dominate the site.
Examples: 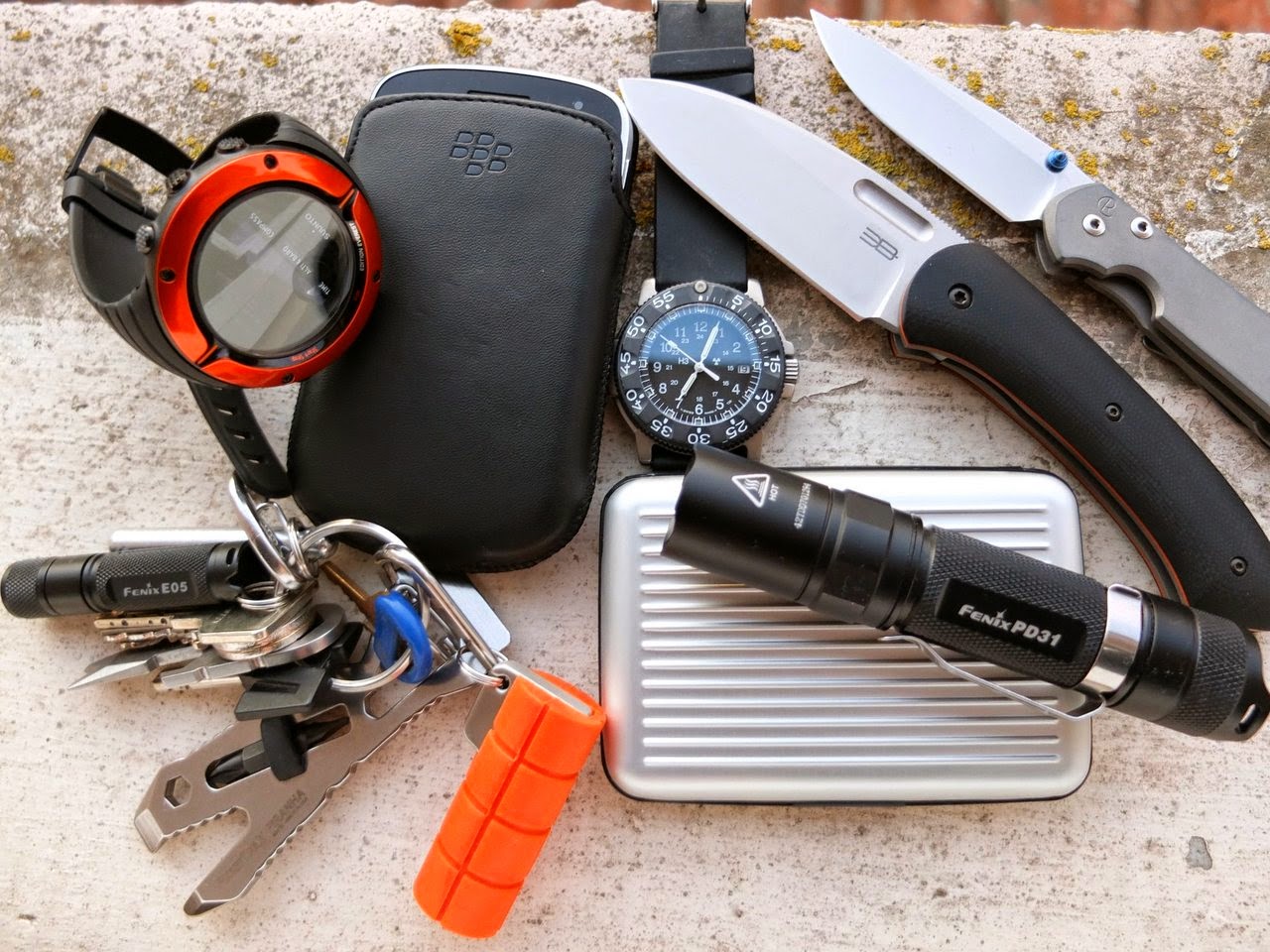 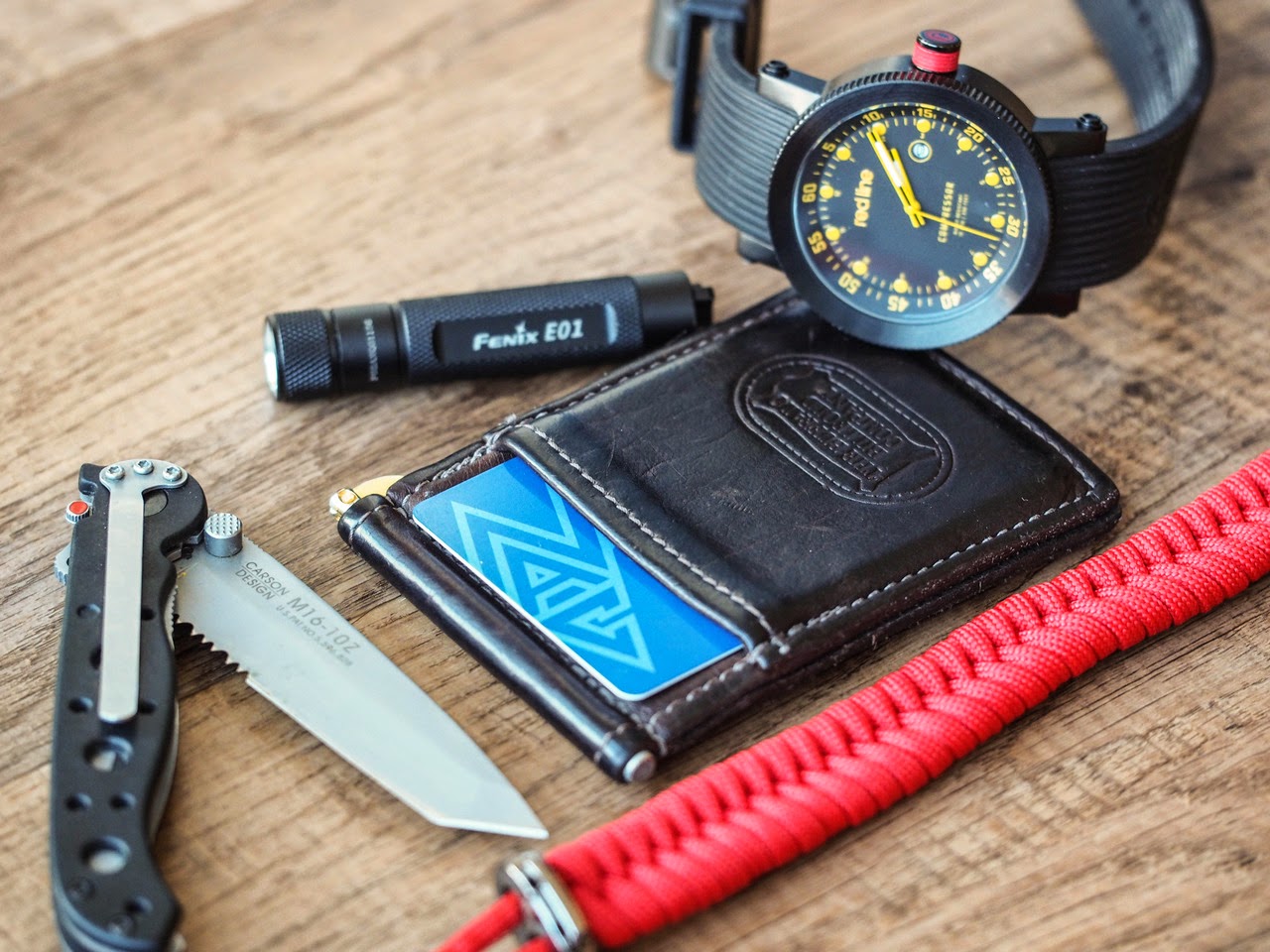 These shots are lovingly crafted by men with full pockets.
My man, Nate, introduced me to EDC, mostly to share in and marvel at its creepiness--discussion is required after spending any amount of time looking at the items in these photographs.
In order to infiltrate and poke fun at the EDC website, we decided to take multiple "everyday carry" photographs of our own. EDC has not published any of them, so I am posting a few here.
I hope you enjoy. 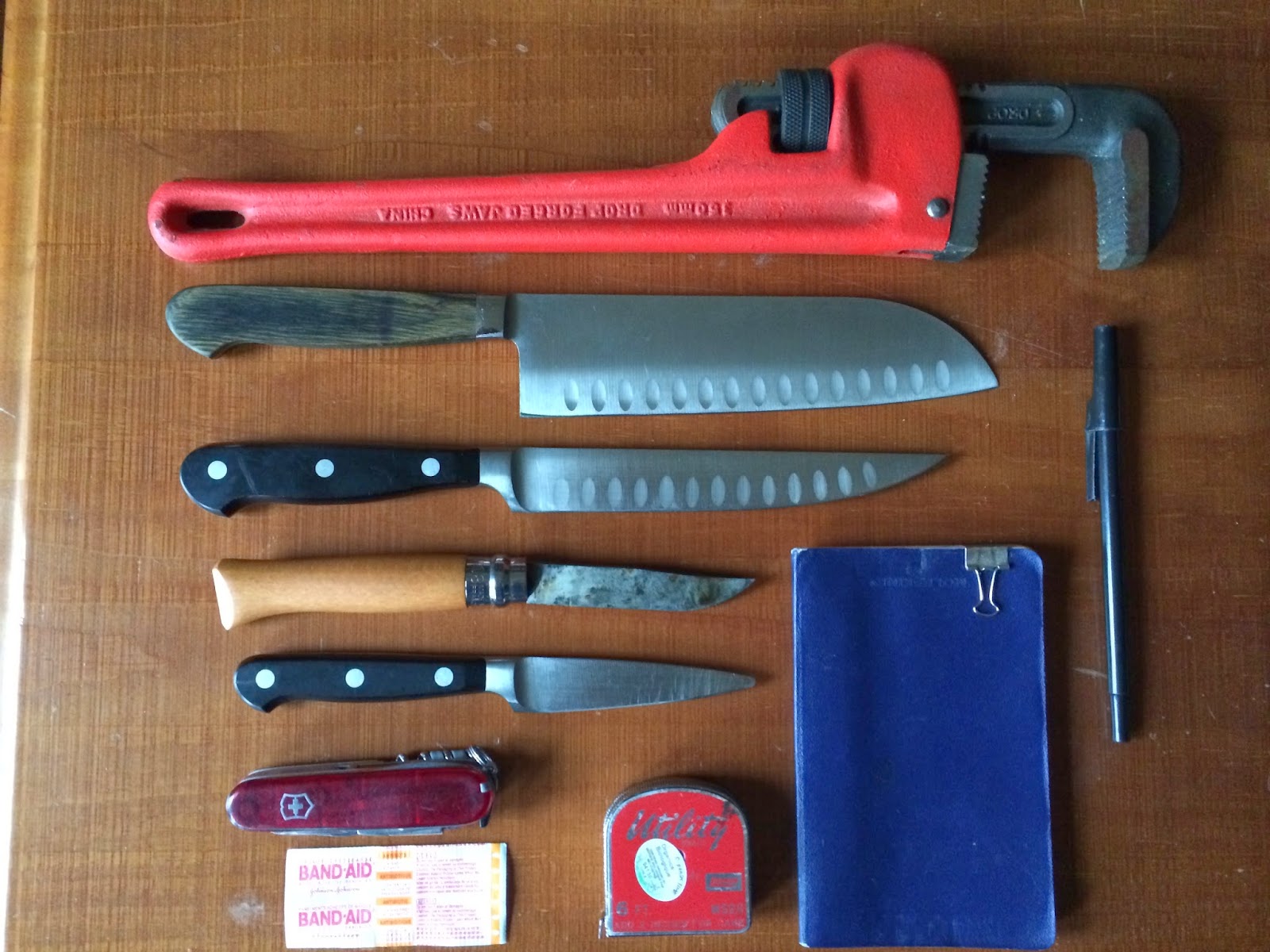 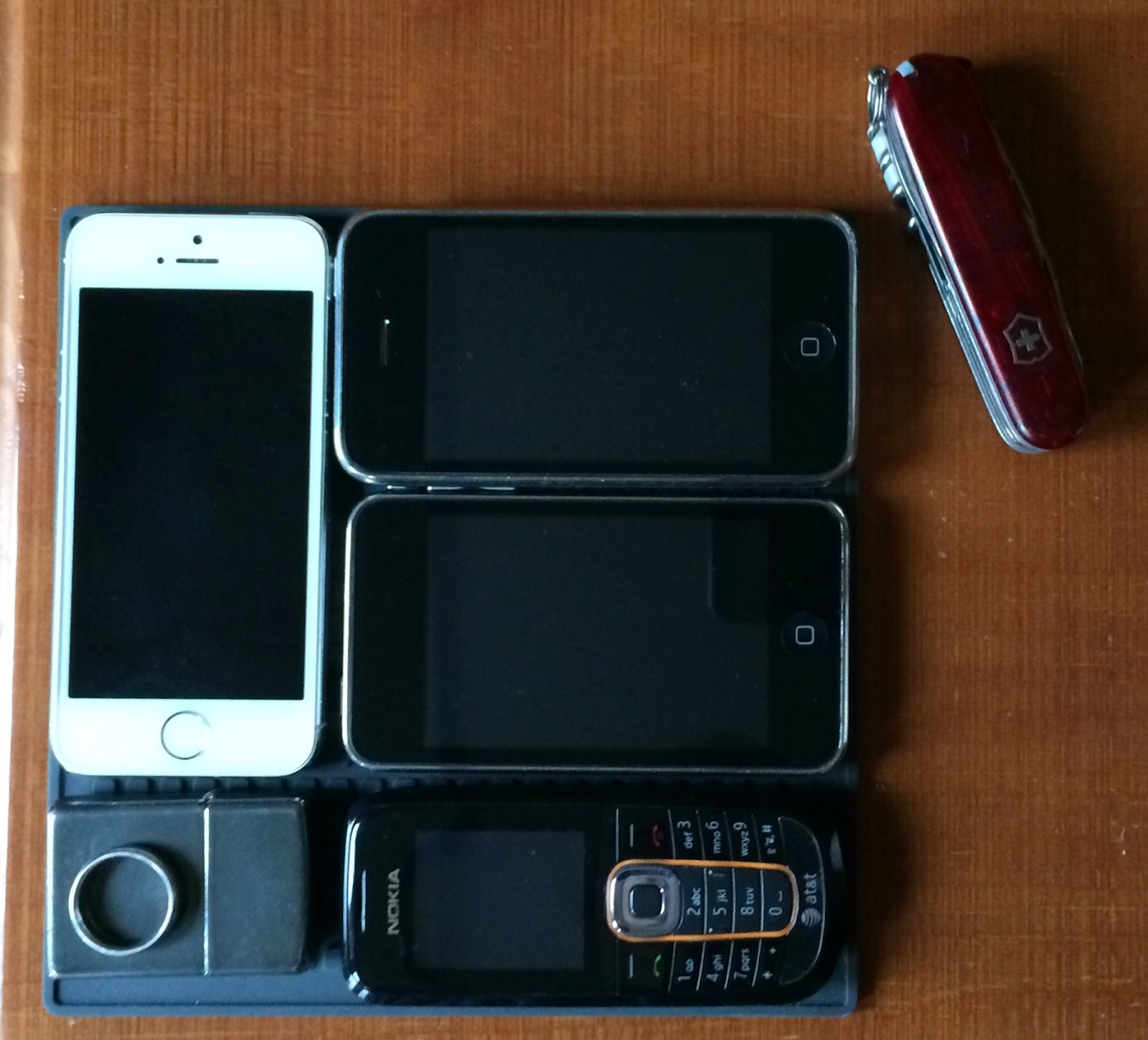 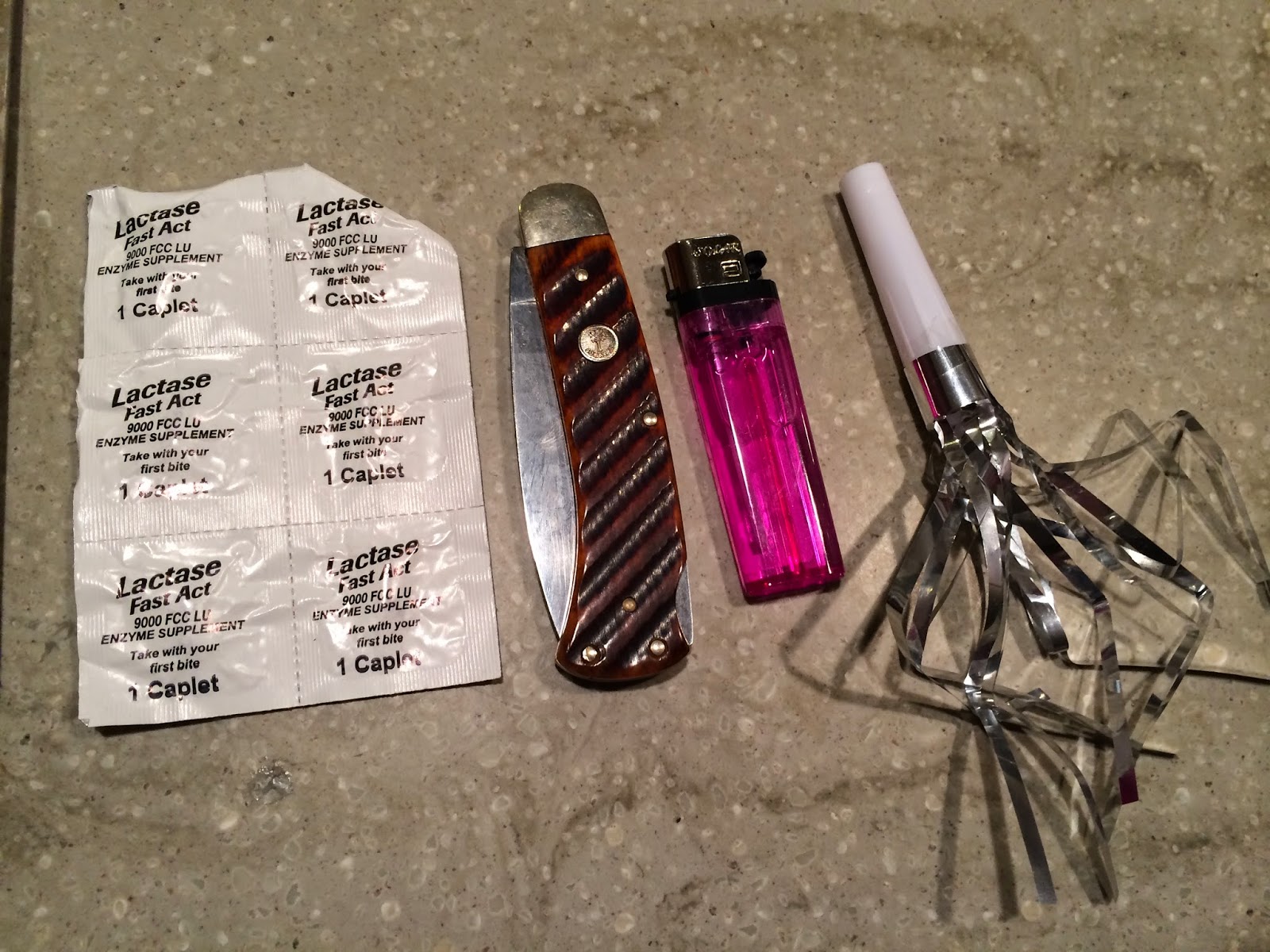