The dogs have never been allowed to sleep in my bed at night. Bow knows this. Pete thinks it's negotiable. I guess he's right.
Since the cold weather crept into the house this winter, I've started saying yes to Pete when he anticipates bedtime and steals into my room. He waits while I get ready, trying to be as good and quiet and unobtrusive as he can be in order to ensure a spot in bed.
This is unusual Pete behavior. Pete is a loud, insistent, asshole kind of dog. He cares about getting his needs met first and lets you know (repeatedly). Food! Walk! Cuddle! Fetch! Attention! But waiting to be lifted into bed, Pete acts like the meekest, mildest dog. I think he knows that if he blends in I will haul him off the floor automatically--another habit of bedtime, like turning off the lights.
A few years ago Pete ruptured two discs in his spine. His back half became useless. He had a hemilaminectomy, which, after several months of recovery, mostly fixed the problem. He can walk and run and gimp his way over downed trees now. He still has trouble knowing when he needs to pee or poop. He counts on me to keep track of that for him, which I'm not always good at. That's part of the reason he hasn't been allowed to sleep in bed and usually sleeps in a crate.
As soon as Pete starts moving on top of the covers, around 6AM, I figure I only have seconds to rush him outside. A drill sergeant voice yells in my head, "Get up!" I do. I run Pete to the front door, hoping that I can get it open before the poop, sometimes dangling from his ass, hits the floor or my arm or we step in it. It mostly works out, but there are nights when I give Pete one too many pizza crusts and forget that this will throw off his whole poop schedule. This happened last night. I woke up at 3AM, felt Pete's body contract, and then smelled shit in my bed. Pete woke up too and looked at me like, what happened? Did I do that? Guilty. It's not his fault. It's mine. And stupid pizza's.
So why do I let Pete sleep with me when there is the potential for this mess? It's cold outside and Pete wants to be in that bed more than anything. He'll even be sweet just to get the chance. I'm glad that I can do this for him. It gives him dog happiness, which makes me happy. But I like having a warm body next to me, too, one that absolutely wants to be there, right next to me and nowhere else. When I lie down and turn out the lights, Pete makes these contended comfort sounds and falls asleep instantly. Those sounds slow my restless brain and help me fall asleep. Thanks, Pete. 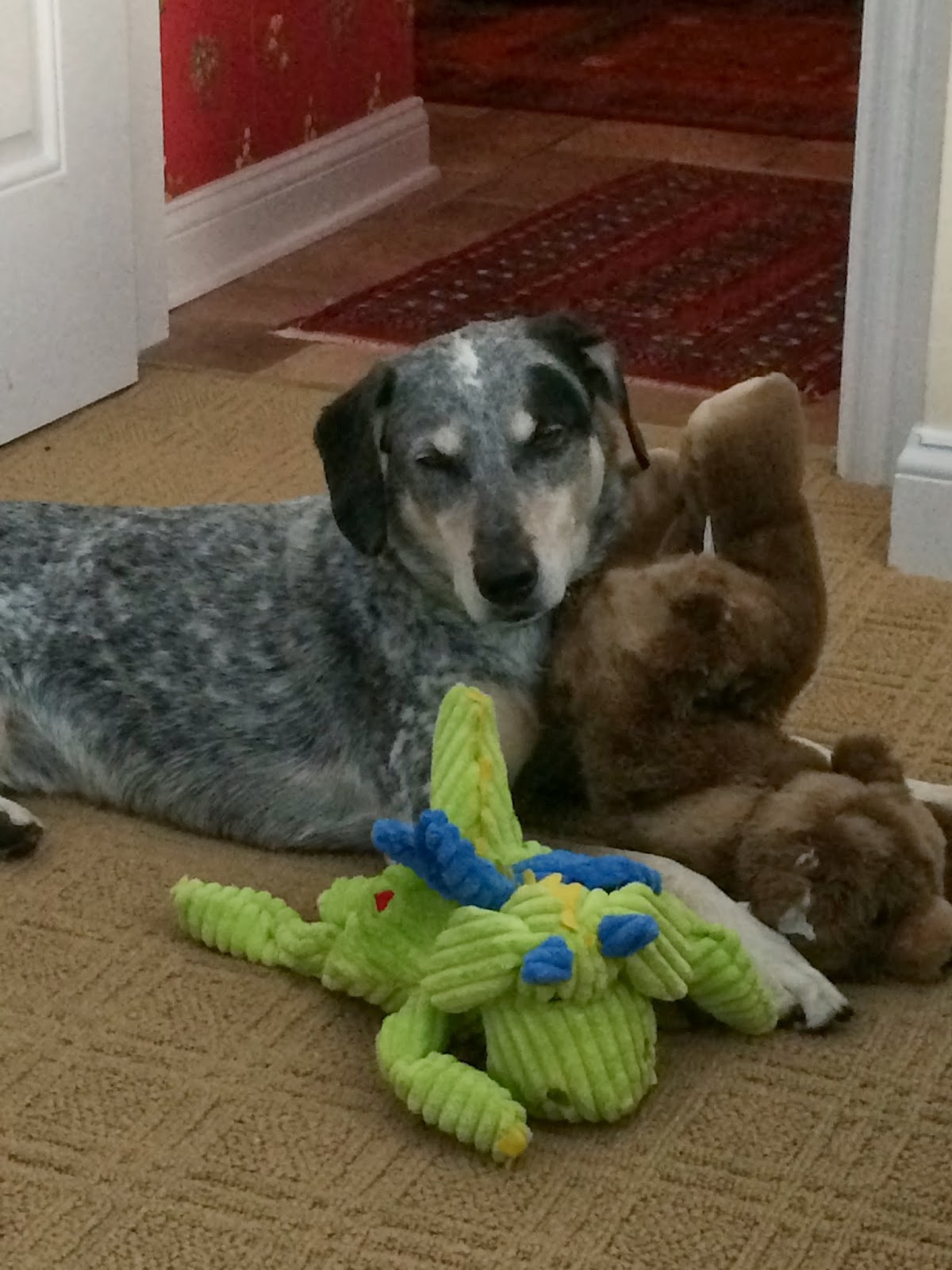 Posted by M Twiddy No comments:
Email ThisBlogThis!Share to TwitterShare to FacebookShare to Pinterest
Labels: Personal

Several winter storms came through our area last week, resulting in the first snow day of the season. 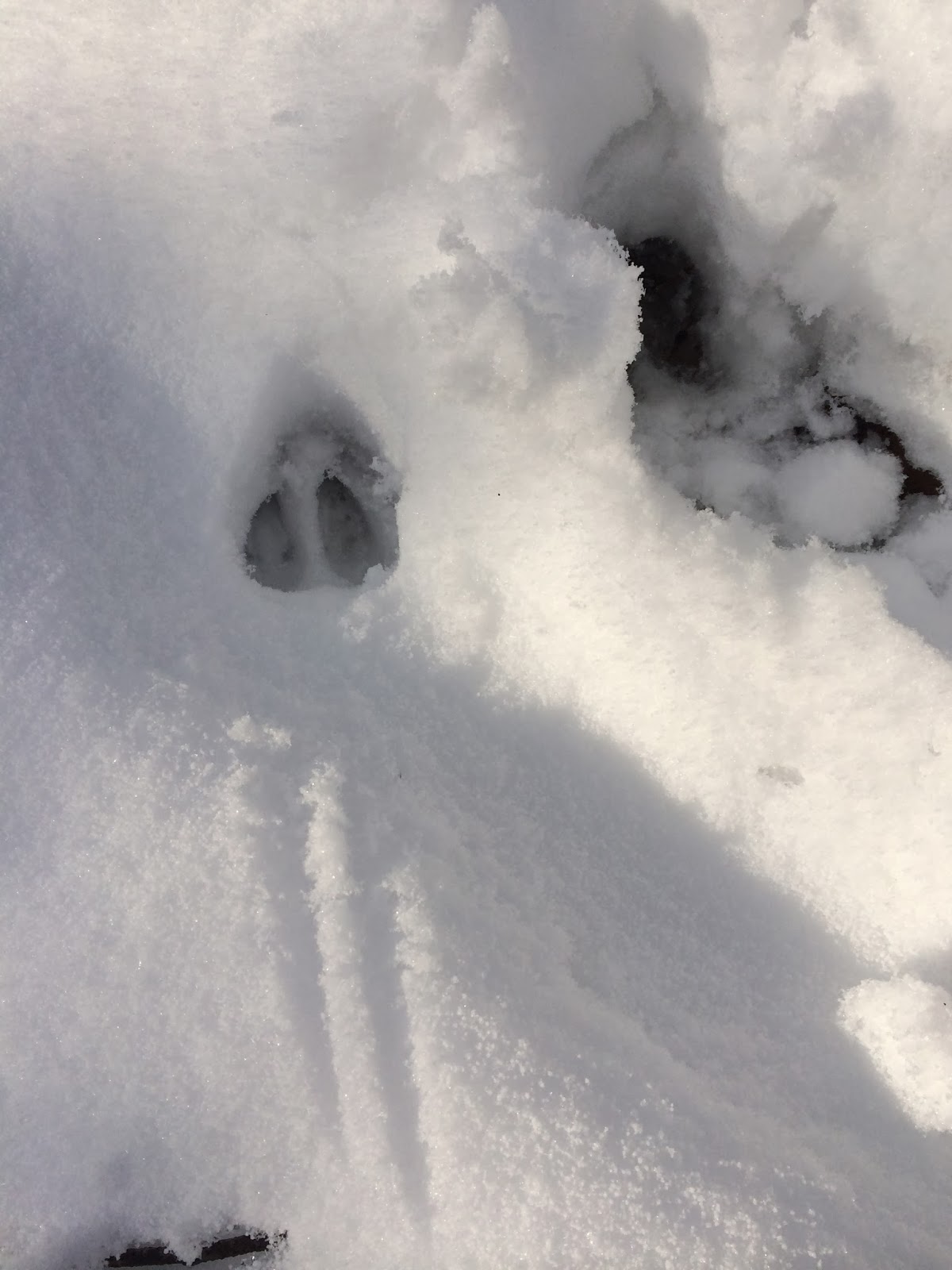 My dad doesn't know my birthday.

When I was eighteen I moved out of my parents' house. On each successive birthday my mom would call, usually after dinner, and we would chat about my day and my plans for the night. She would eventually hand the phone to my dad, who would say, "Happy birthday, darling!" We would go one additional round before hanging up.
I didn't think twice about that order of operations, it was the birthday routine. That changed when my parents separated and then divorced.

The first year after the divorce, Dad forgot my birthday. I thought, oh, he's really torn up and in pain. I'll give him a call. I did. Our conversation was focused on him, his new girlfriend, new living arrangements, and new life. At the end of the call he thanked me for checking in with him. It made me feel good. It only occurred to me later that he still hadn't remembered my birthday. I asked my siblings, "Did Dad remember your birthday this year?" They all said, "Yes!" like it was a sacrilege to have asked.
Huh. Okay.
Over the next eight years, Dad either forgot my birthday or assigned it a new date. He would call a month before, "Happy birthday, darling," or three months after, "Happy birthday, darling." It was as if my birthday were attached to his winter sense memory and rounding it up to the season was normal. Now everyone in the family noticed. I talked with him about it. My siblings talked with him about it. Dad made excuses. He said, maybe it was because I was the youngest, or because my birthday is so close to Christmas and other dates, or because he was just getting old. In the end he said he would do better.
I asked my mom if Dad used to know when I was born. "Was he even there?" I asked.
"Oh, he was there," she said as though she wished he had not been. She huffed into the phone. "I can't explain your father's oddities, honey. What I can tell you is he hasn't remembered your birthday for a long time. It was that way well before the divorce." She offered no further explanation.
Huh. Okay.

The next year I married a thoughtful man named David, whose birthday is in October. Dad started sending David on-time birthday cards with a check for $100. And then he started including a second check in the card for $50 which read: For Sylvie's birthday.
I called Dad the second year it happened and asked him, "What the fuck?"
He laughed and said, "Oh geez. I'm sorry, honey. I must not have been paying attention to the amount. I'll get it right one of these times."
I said, "It's not about the money, Dad! You've been forgetting my birthday for years and now you're lumping it in with David's? Is it ignorance or a deliberate slight? I'm starting to hate my birthday because of you." He was silent in a way that let me know he was hurt and pouting. I softened and said, "Why can't you just put it on the calendar?"
"You're right. I'll put it on the calendar. And I'll ask your brother to call and remind me."
"Dad, why do you only forget my birthday?" I felt defeated asking this question.
"Oh, I don't know, darling. We've been over this. It's so close to other important dates..."
I still think that was the worst answer possible.
Dad and I have not talked about his inability to remember my birthday since that conversation, but he still doesn't remember. My uncle's close birthday has been his excuse for the last three years.

My birthday is next week. So it was no surprise when Dad called today to wish me a happy birthday.
He said, "Happy birthday, darling!"
I said, "Hi, Dad. My birthday is next week."
"Oh, geez. Today must be your uncle's birthday. I always think of his birthday. You know, he was so important to me."
"Yeah, Dad. I know."
"Ha ha ha. You know what I mean. I guess I need to change your birthday in my calendar app."
"Yeah. I think you said that last year."
"You're probably right. I'll do it right after I get off the phone with you." He laughed again. It sounds embarrassed and uneasy to me. The laugh petered out and he said, "Well, it's really cold up here and the wind is blowing. It's probably good for the skiers because ... " I stopped listening. After the weather report he asked me about my birthday plans.
I said, "I don't know what we're doing yet, Dad. It's next week. Thanks for the call, but I gotta go."

I'm not angry that he doesn't know my birthday. I'm not even curious to know why anymore. My feelings are at a distance, just out of reach. That's what I think about when I think of my birthday.
Posted by M Twiddy No comments:
Email ThisBlogThis!Share to TwitterShare to FacebookShare to Pinterest
Labels: short short

On my drive home from work today I heard a portion of Fresh Air! with musical guest Mark Mulcahy, which led me to read this article, which reminded me that there was a television show, The Adventures of Pete and Pete, that was always on in dorm rooms when I was a freshman in college, which reminded me of Veronica Mars for some reason, which led me to a do a cast between two titles search on imdb.com which turned up Geoff Pierson (how could I have forgotten?), which alerted me to the fact that I have not watched the last season of Dexter and probably never will. The cast search also revealed that Patricia Hearst was an actor on both shows, which made me think of Drunk History, and I remembered that Jason Ritter was in at least one episode, and you know, he is always good, so I watched the Atlanta episode of Drunk History while eating dinner ... and wrote this.
Read, play, listen, watch, enjoy.