A year ago, Christmas Eve Day, I took an eight hour walking and driving tour of Detroit offered by the historian/artist at detroiturbex.com. The tour focused on the history of Detroit--its changing neighborhoods, communities, buildings of worship, and system of public education--as well as prospects for the future in the midst of the city's bankruptcy proceedings. Because I'm a teacher, my tour guide adapted the tour to include as many schools as time allowed.


Each school we tour is in a different stage of  disrepair. In the best case, the lights/heat still work, and some programs are being run out of a section of the building (usually taken over by a private education entity). These schools have lockers on the walls. Schools that are actually closed, but still have a chance to be purchased or salvaged, have a door open, with all the lockers removed, and no lights, but they're fairly clean, and the windows are mostly intact. The worst cases are schools that have every metal window frame ripped out, drag marks or tiles missing on the floors from pilfered metal, glass everywhere, homeless huts in rooms, and staged metal near doors. If there is too much metal by a door, my guide does not take us inside a building because it means that someone is actively collecting scrap.
Unfortunately, most of the schools we see in the afternoon are already in bad shape.
My guide explains that there are three types of scrap yards in Detroit. We visit all three (I have no photos). There are legitimate yards that require documentation for the scrap collector and their metal. These yards have lots of neatly organized metal that is heavily guarded. There are semi legitimate yards that may not require a collector's full ID, but still require paperwork on their metal. Like anything, this paperwork can be forged. The third type of yard is illegal and usually run out of the back of another business or out of someone's home. Scrappers can bring a stolen metal bust to the door, get pennies on the dollar for it, and the metal will be taken and broken down by the yard owner. In one illegal yard we see a sledge-hammered eagle that my guide says was probably taken off a municipal building.
We meet one scrapper who my guide is friends with. The man is an ex con who cannot find enough work to pay his bills, which is why he scraps. The man wears a Lions jersey and heavy workboots.
We do not have time to go to any established neighborhoods, of which there are many. We do visit newly opened or reopened schools, housing developments, and some strangely vibrant areas that are not new. Corktown and Brightmoor stand out.
Corktown,  an old neighborhood that is being revitalized, is just west of downtown on Michigan Ave. It is the neighborhood where Tiger stadum stood. That's where I went as a kid to watch my favorite Tiger, center fielder Chet Lemon, play baseball. I remember paying $2 for great seats near home plate. The stadium was torn down in late 2000s, but the baseball diamond is still visible behind a fence at the corner of Trumbull Ave. and Michigan Ave. There are new housing developments, bars and restaurants in the area.
Brightmoor is northwest of downtown. Most of the industrial plants back in the day were right on the water, the Detroit River, obviously polluting. The soil where the plants stood (car manufacturing, tire manufacturing, coal-fired power) is mixed. Some sites are still toxic. The waterfront should be developed, should be where the money is, but building permits have been hard to obtain because of this toxic soil. Clean up has been a slow process, but it is happening. Brightmoor, north, has always been considered on the outskirts of the city and remains underdeveloped. It's now a subsistence farming, artist, and squatter community. There is decent soil there.
My guide explains that the way Brightmoor works is, people move in, squat, and if they can hack it for a few years, they've earned their right of passage and they're considered a part of the community. It sounds like this is a really close group of people who live and work together, and keep their patch of community thriving. We pass a few green houses. I note that my car thermometer reads fifteen degrees outside. And we can see tomatoes growing in a hothouse across the road.
My guide tells me that Brightmoor still has arson. And that the city doesn't provide services out here. There are maybe three or four houses per city block. There are no operating schools. The children are mostly home-schooled.
This seems like a hard community experiment. I look forward to hearing more about the results in the future.

By now the sun is going down. My guide discusses the history of Detroit and the failure of the Chicago model for certain ethnic groups in Detroit. We drive by iconic ruins and works of art in the city, but by the time we get out of the car the sun is gone. My guide keeps us away from the Heidelberg Project, saying it's crap. I don't argue with him.
I drive us back to the resturant where we first met in the morning. They are busy now. I feel energized. My guide and I shake hands, say a few parting words, and go our separate ways. My head is stuffed full of information, the history of the city mixed in with my own history.

Returning this Christmas, 2014, I am still processing what I learned last year. Detroit is out of bankruptcy, there is new construction downtown, and public and private funds are pouring in. There is a new rail line going in on Woodward Ave.--M-1 rail--that looks like it should be more useful than the "People Mover" was. But the neighborhoods, schools, and houses of worship I visited last year were in the same state of disrepair. The city is still huge and now it's certainly rangy.
Detroit was not cold this year like it was last year. It was wet and foggy. The fog was so thick that I couldn't see the cityscape clearly as I drove through. From the Detroit River, I heard freighters sounding their fog horns as they passed each other in the channel. It's a loud, clear, and close sound, perhaps a distinctly Detroit sound.
Posted by M Twiddy No comments:
Email ThisBlogThis!Share to TwitterShare to FacebookShare to Pinterest
Labels: Community, Personal

One of the hazards of living far away from all your loved ones is someone always get left behind. This season it's Pete. This will be our first Christmas apart. We're both feeling a little melancholy. 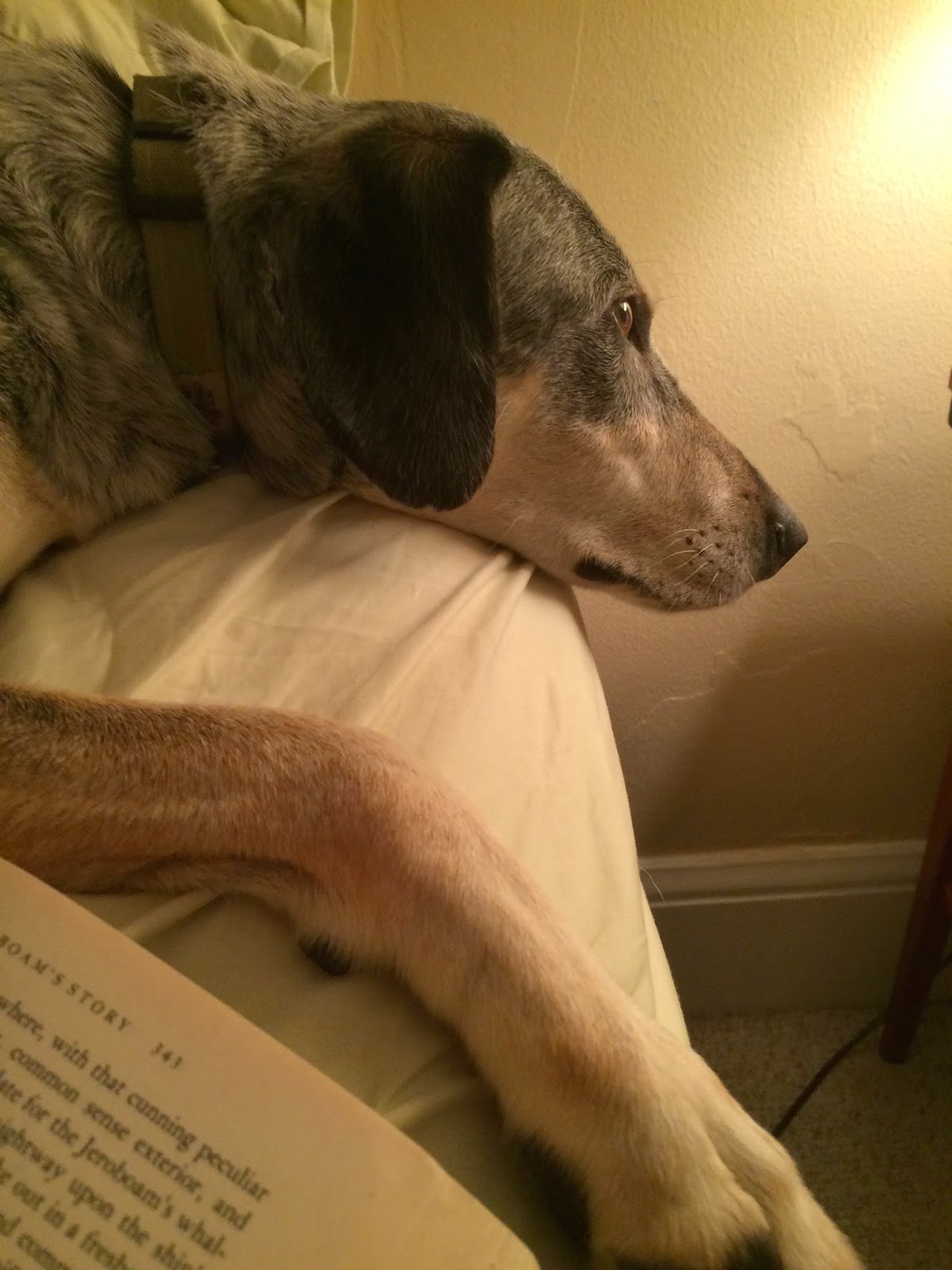 But don't worry buddy, I'll be back soon and then we'll tear into your squeaky toy gifts. 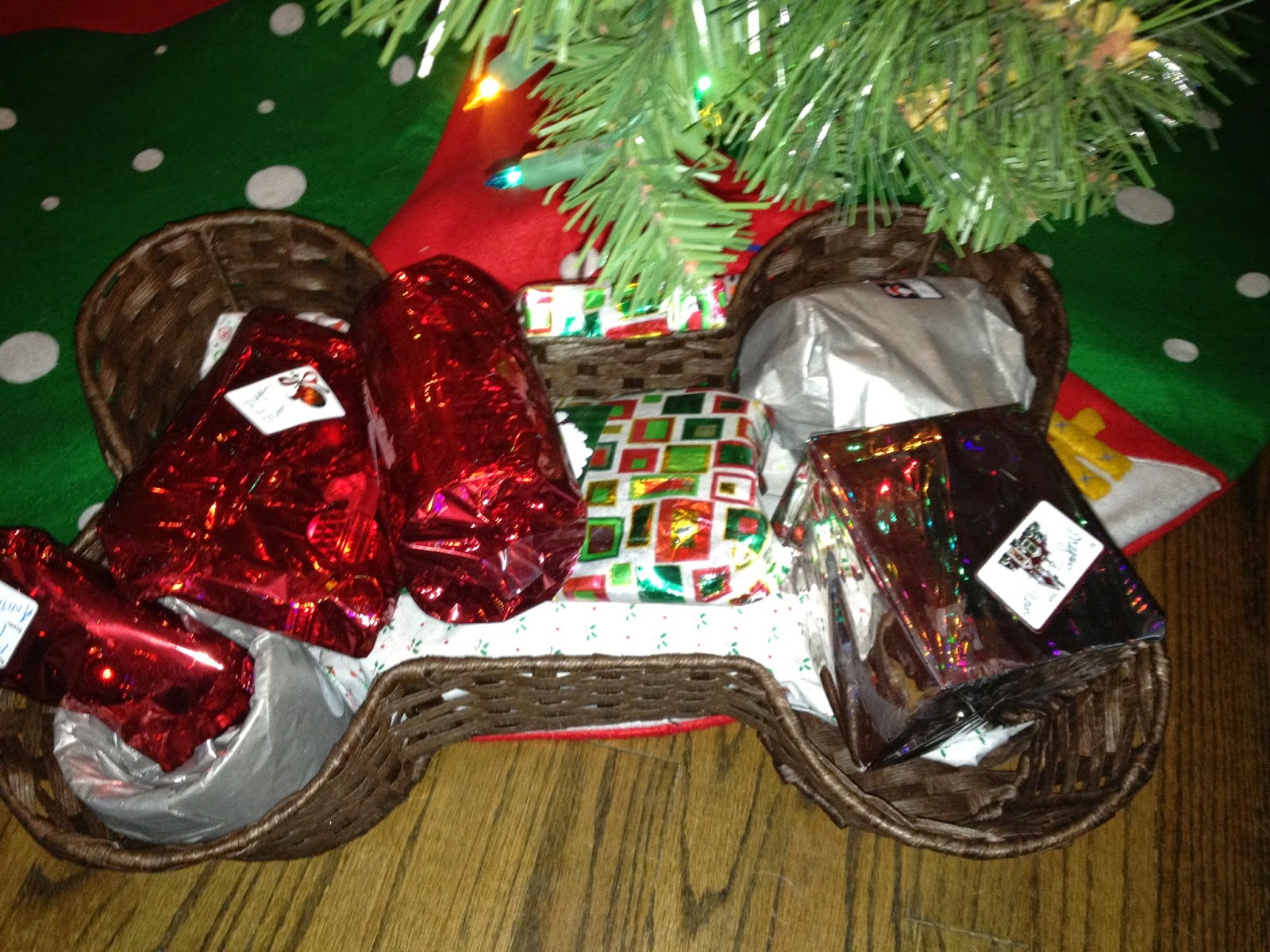 Posted by M Twiddy No comments:
Email ThisBlogThis!Share to TwitterShare to FacebookShare to Pinterest

Sweden is dark in the wintertime. In December, the sun is only visible for seven hours on a clear day. To keep the darkness at bay, Swedes turn on lights, set candles in their windows, and put up festive decorations for the holidays. I'm familiar with these traditions only because my sister-in-law lives in Sweden with her husband and two baby girls.
I admire pretty much every single thing about my sister-in-law.
Today is her birthday.
Anna, in solidarity with your Arctic circle plight, I'm lighting a candle in my window. There will be luminaria to follow on Christmas Eve. I love you. I'm so grateful to have you in my life.   Happy birthday. 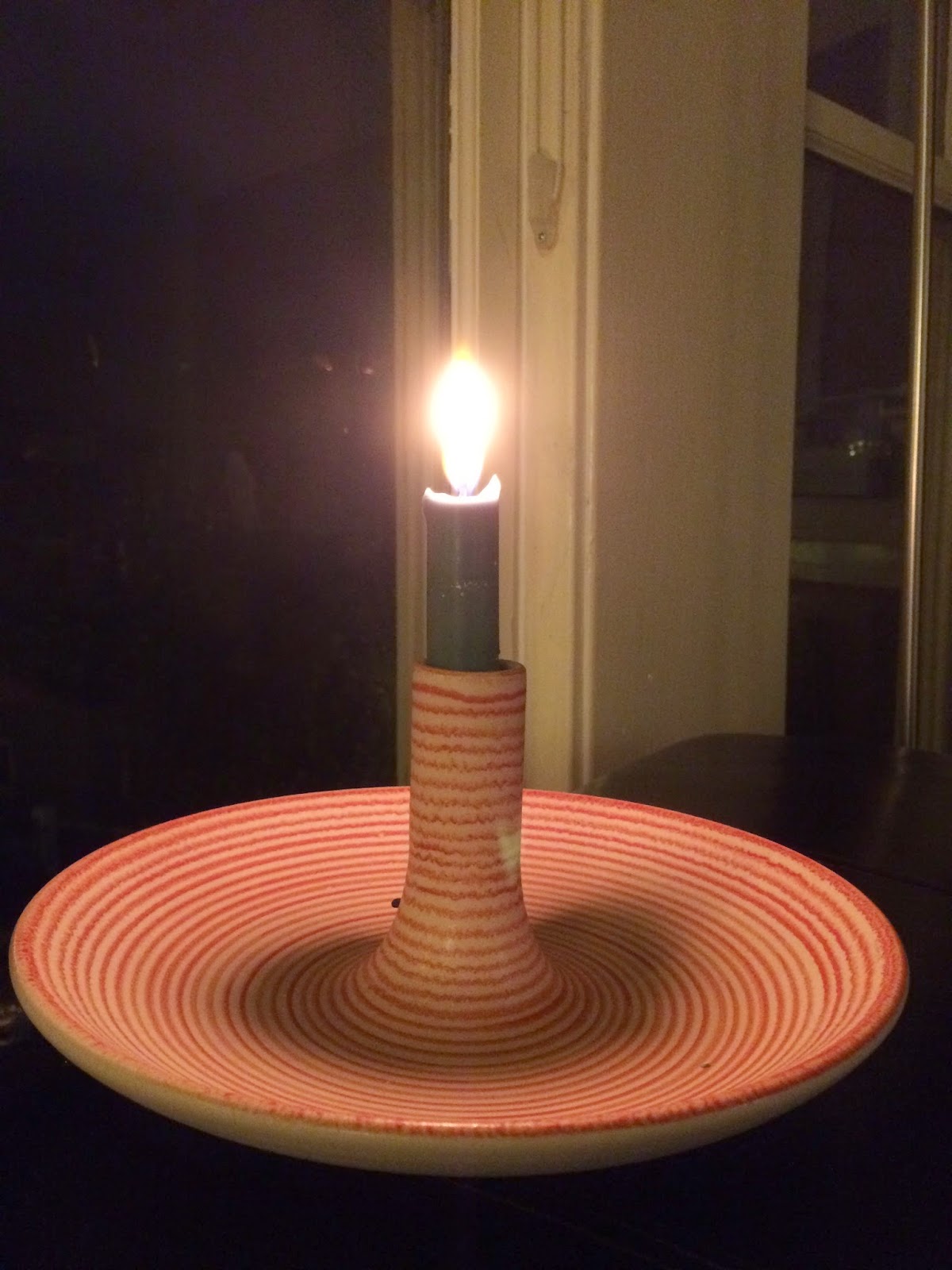