It has been a long, cold winter, but, in the Maryland/D.C./Virginia area, we were granted a respite last weekend. On both Saturday and Sunday it was sixty and sunny. For the first time in months while outside, I could feel warmth on me--heat generated by the sun, not my work.
A hike in the Appalachians on Saturday revealed a soggy forest floor, heavy, wet layers of melting snow, overflowing creeks, and mosses emerging from beneath their white blankets.
There were plenty of deer, too. Bow was interested in nothing else. 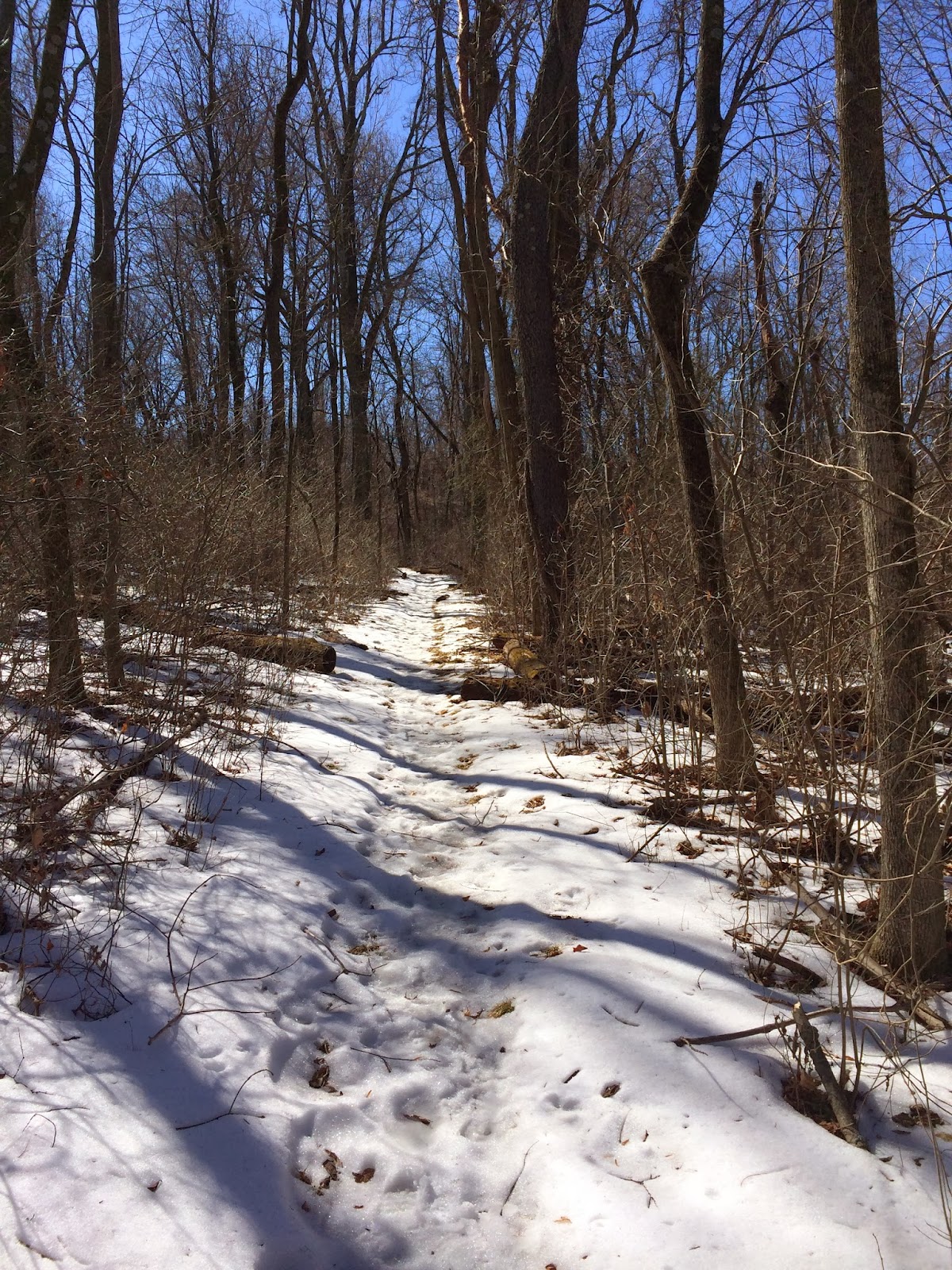 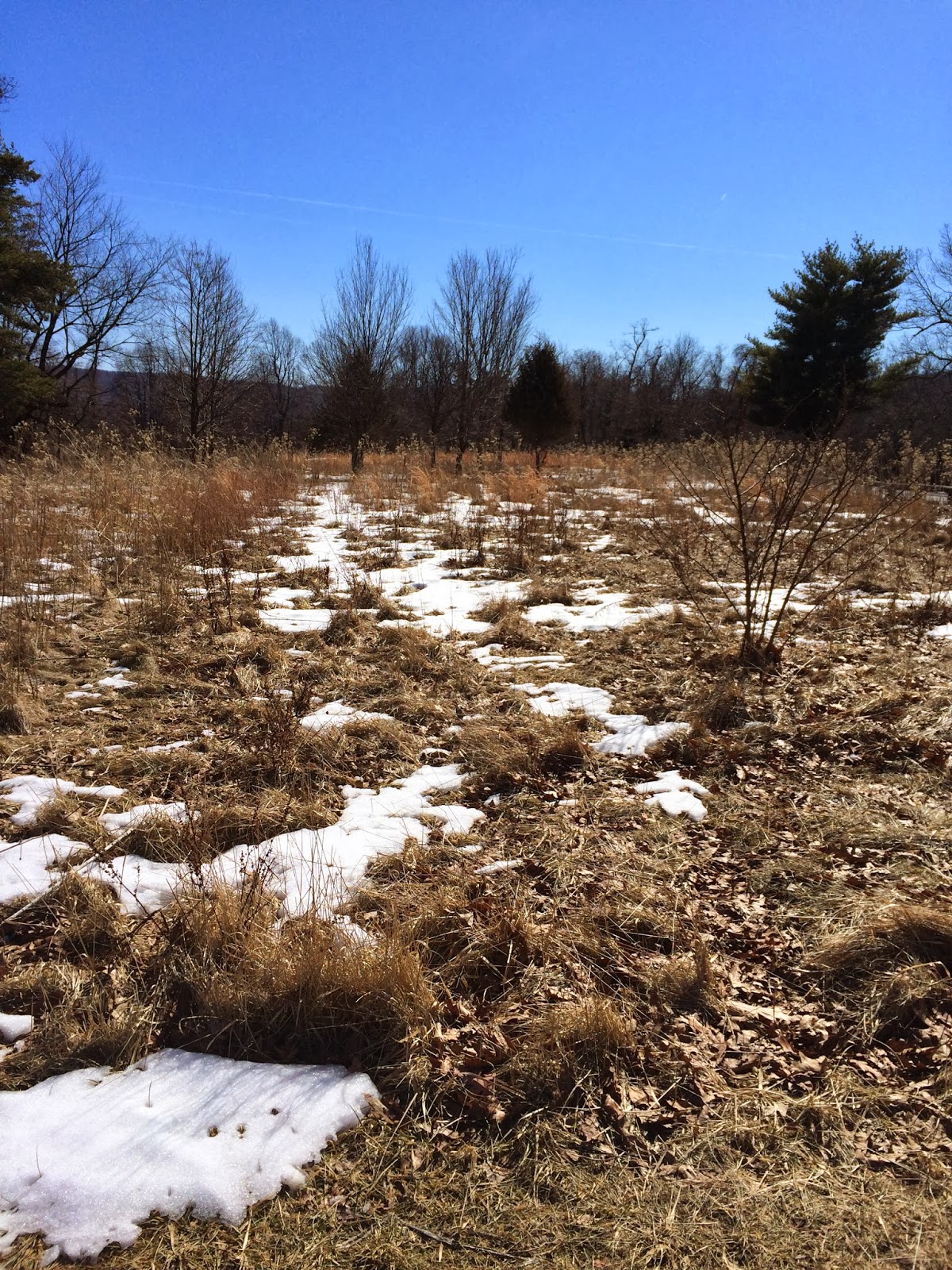 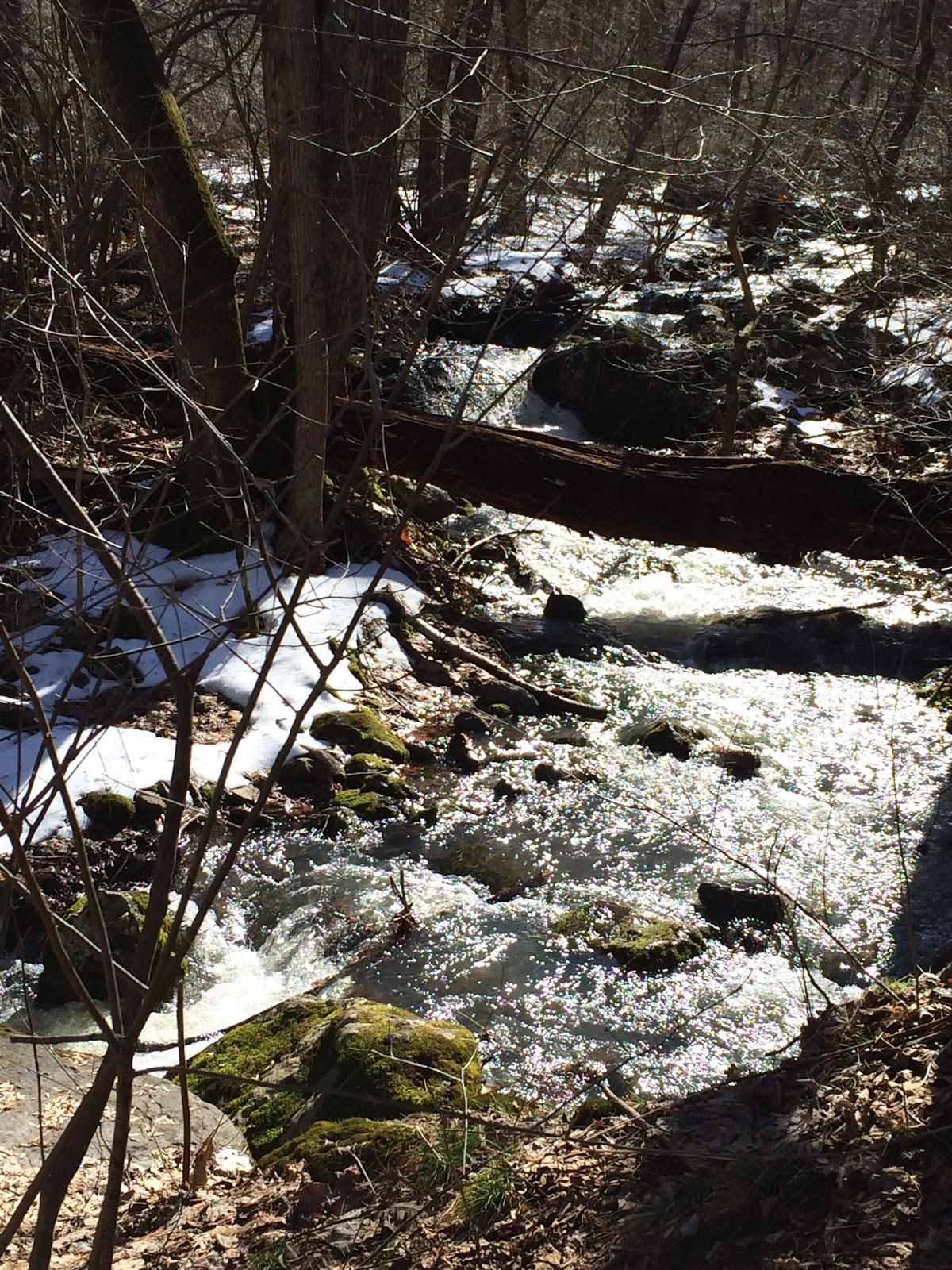 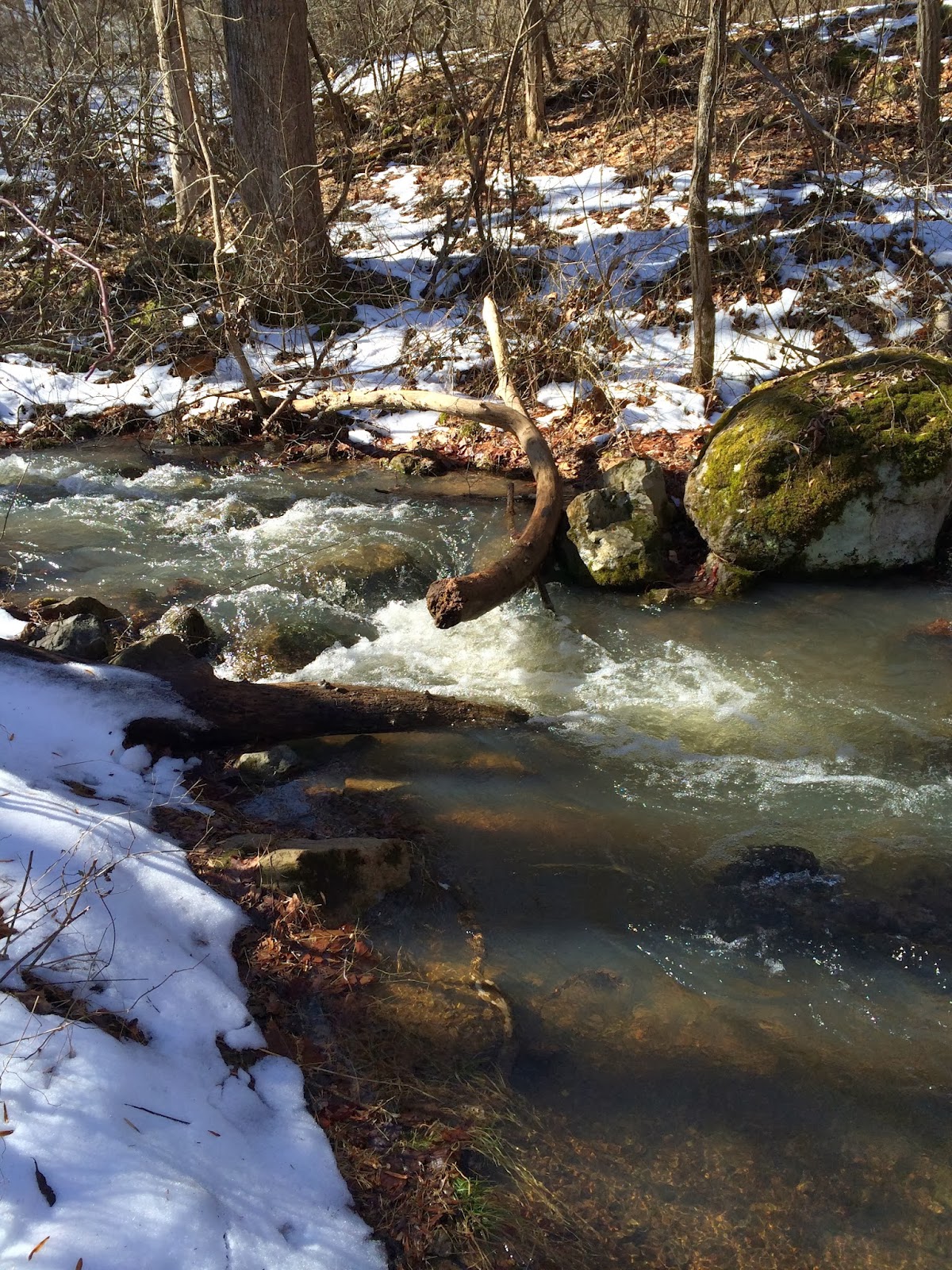 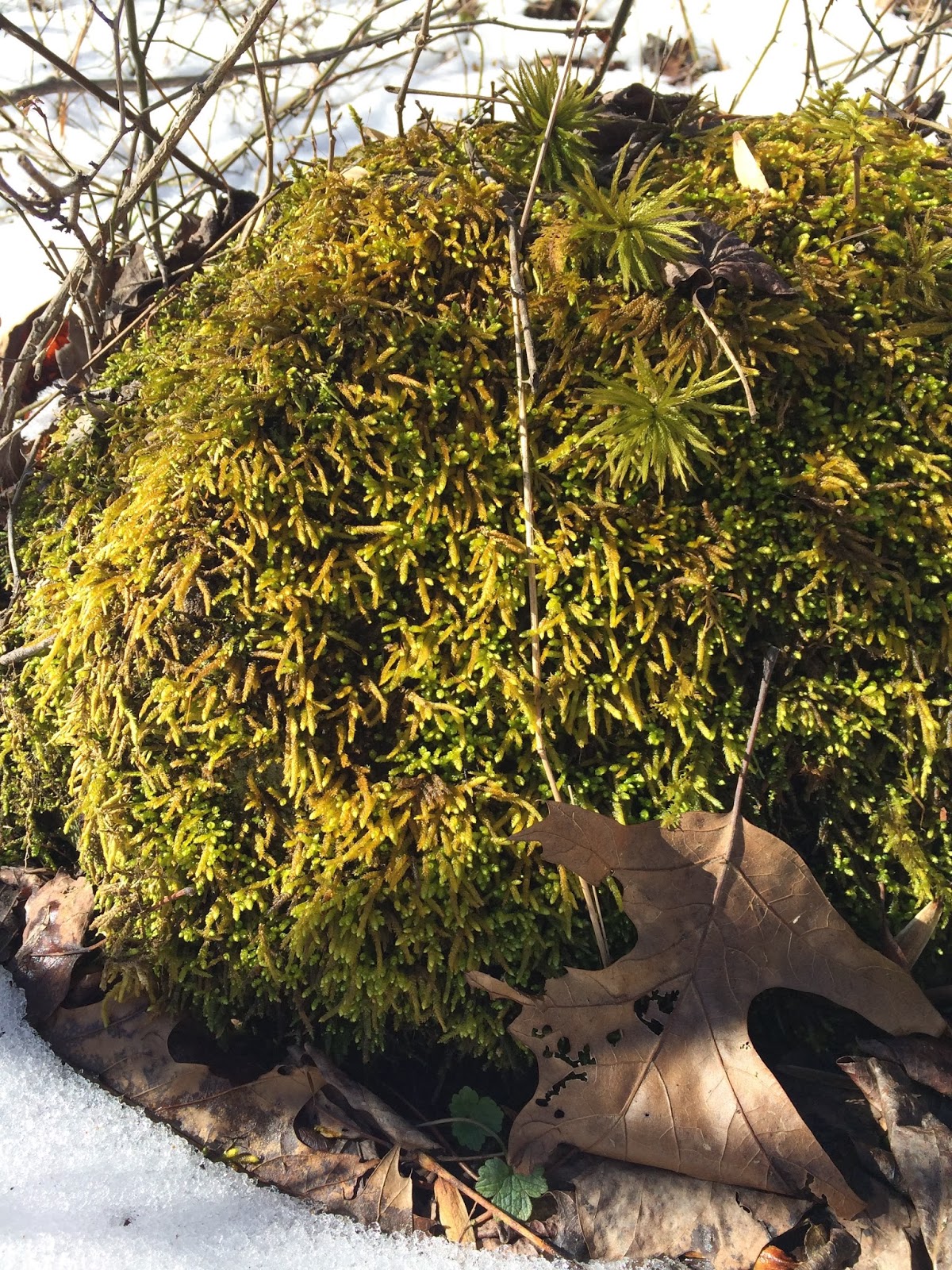 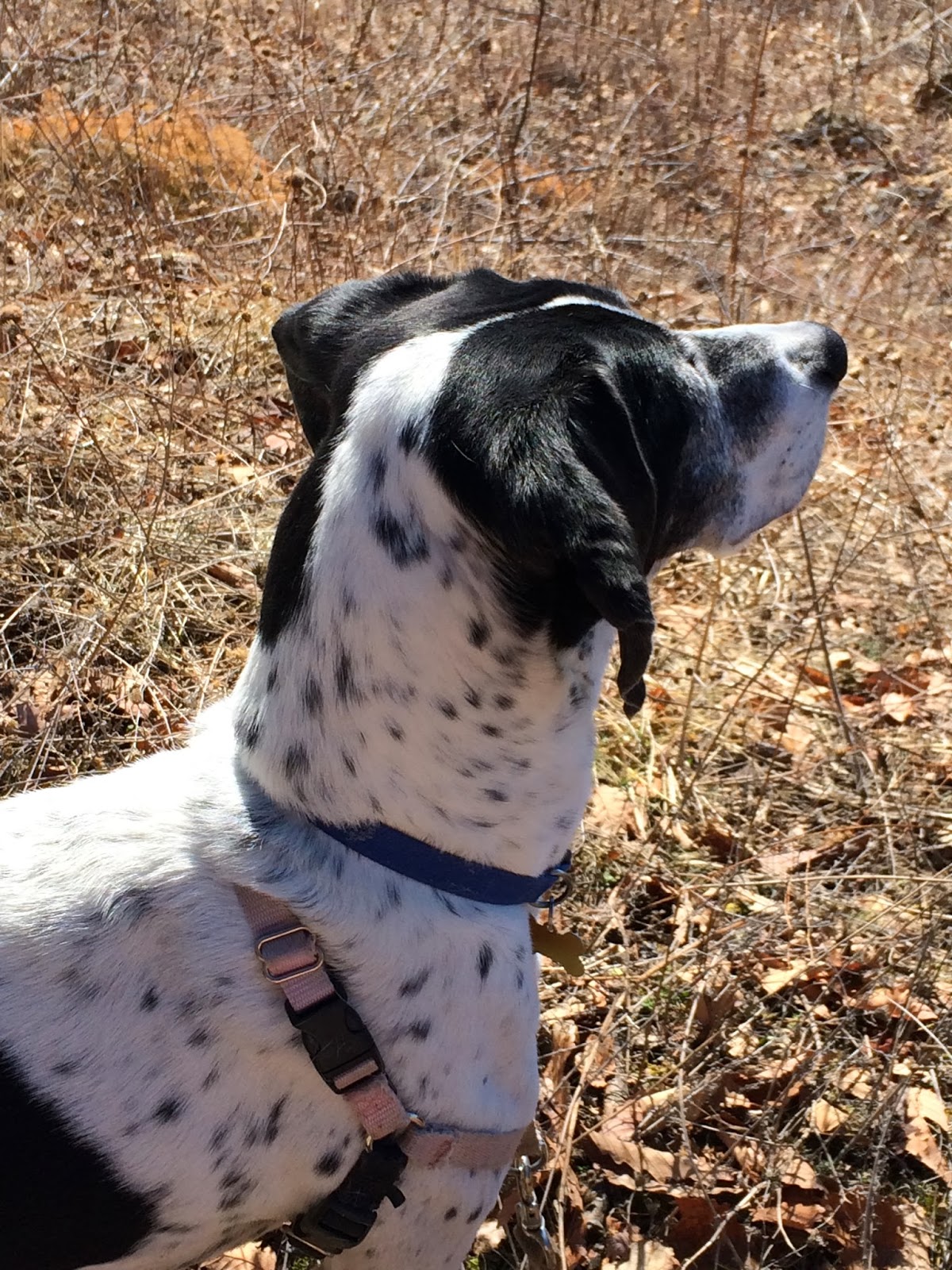 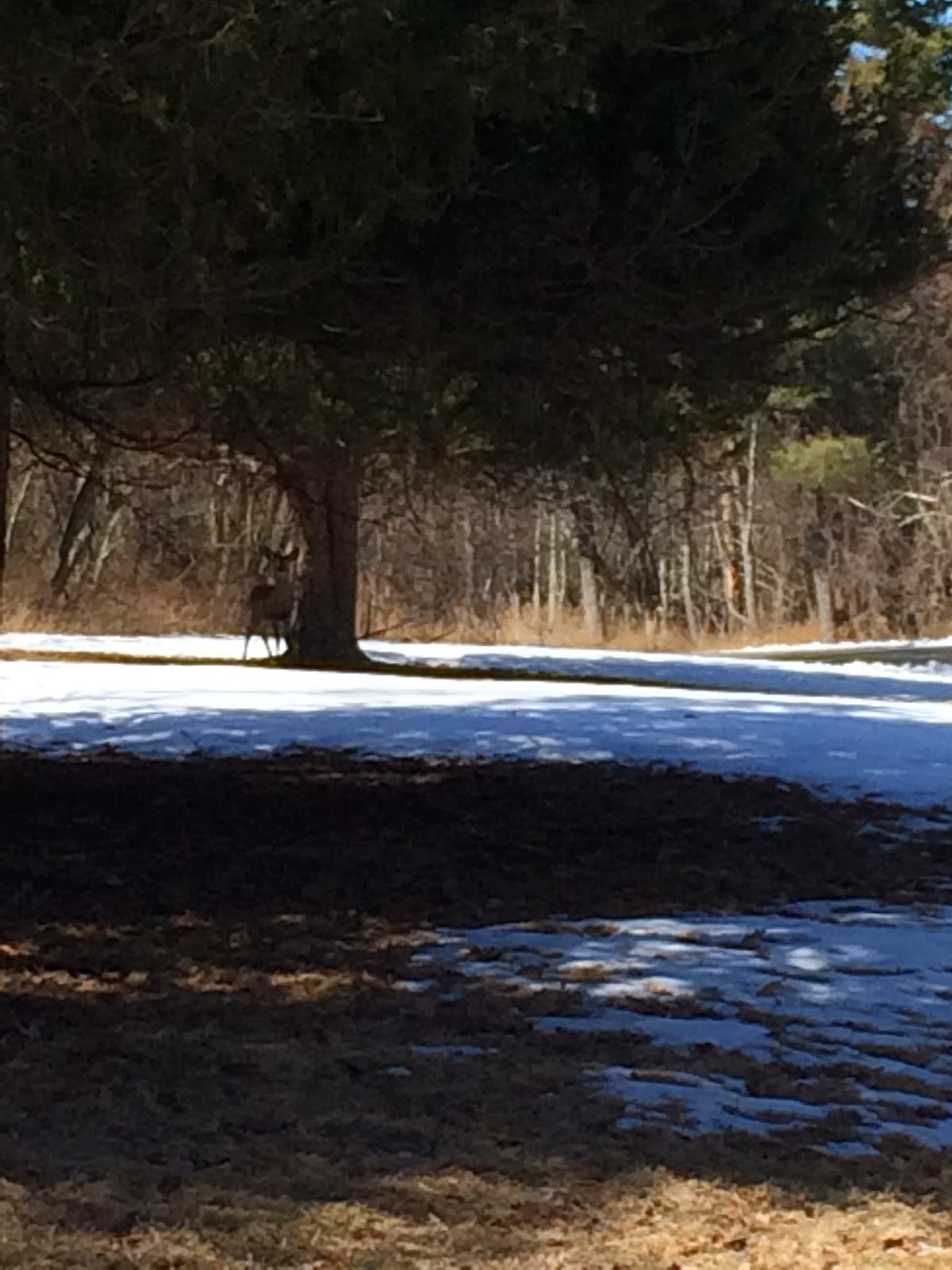 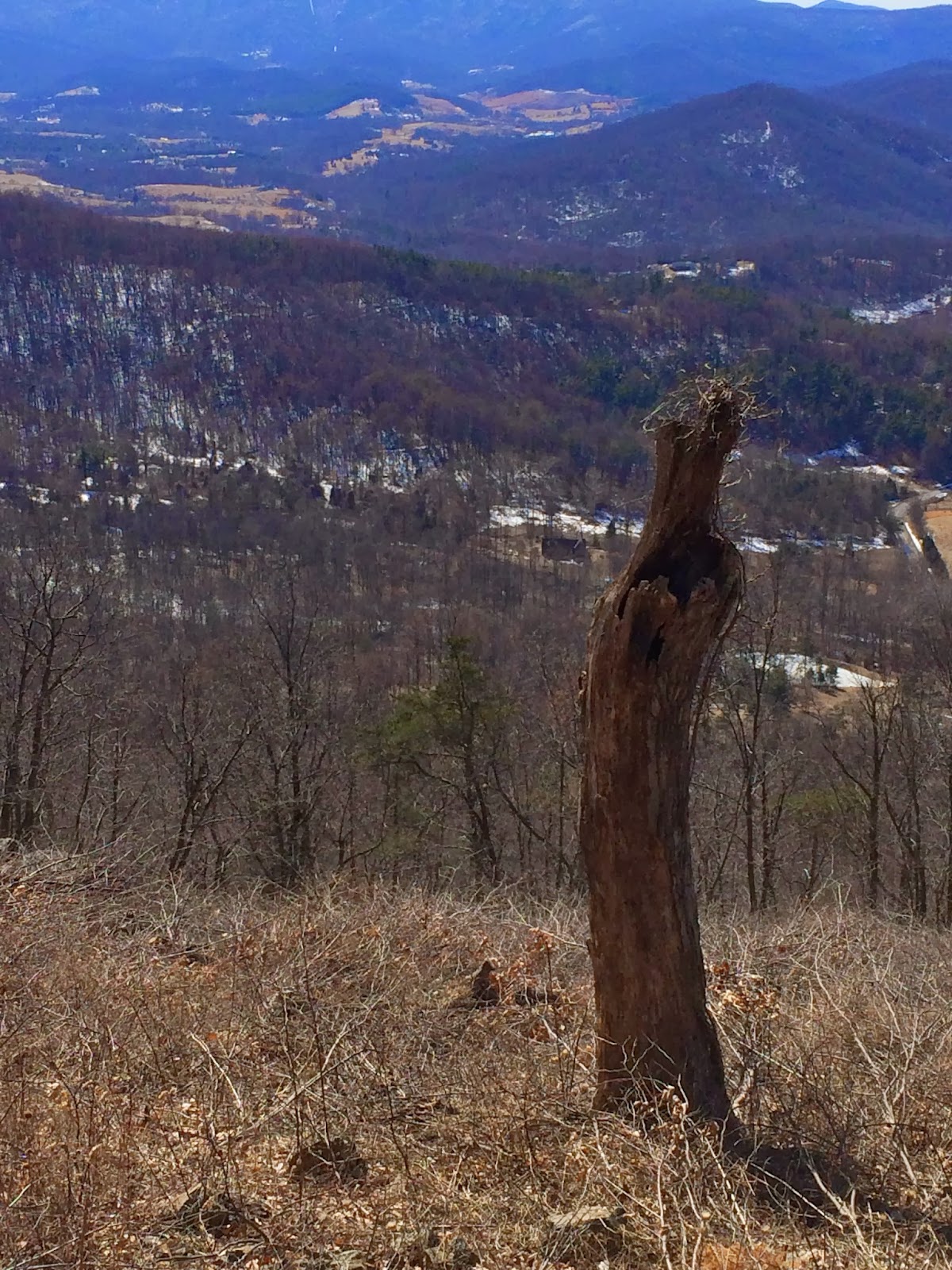 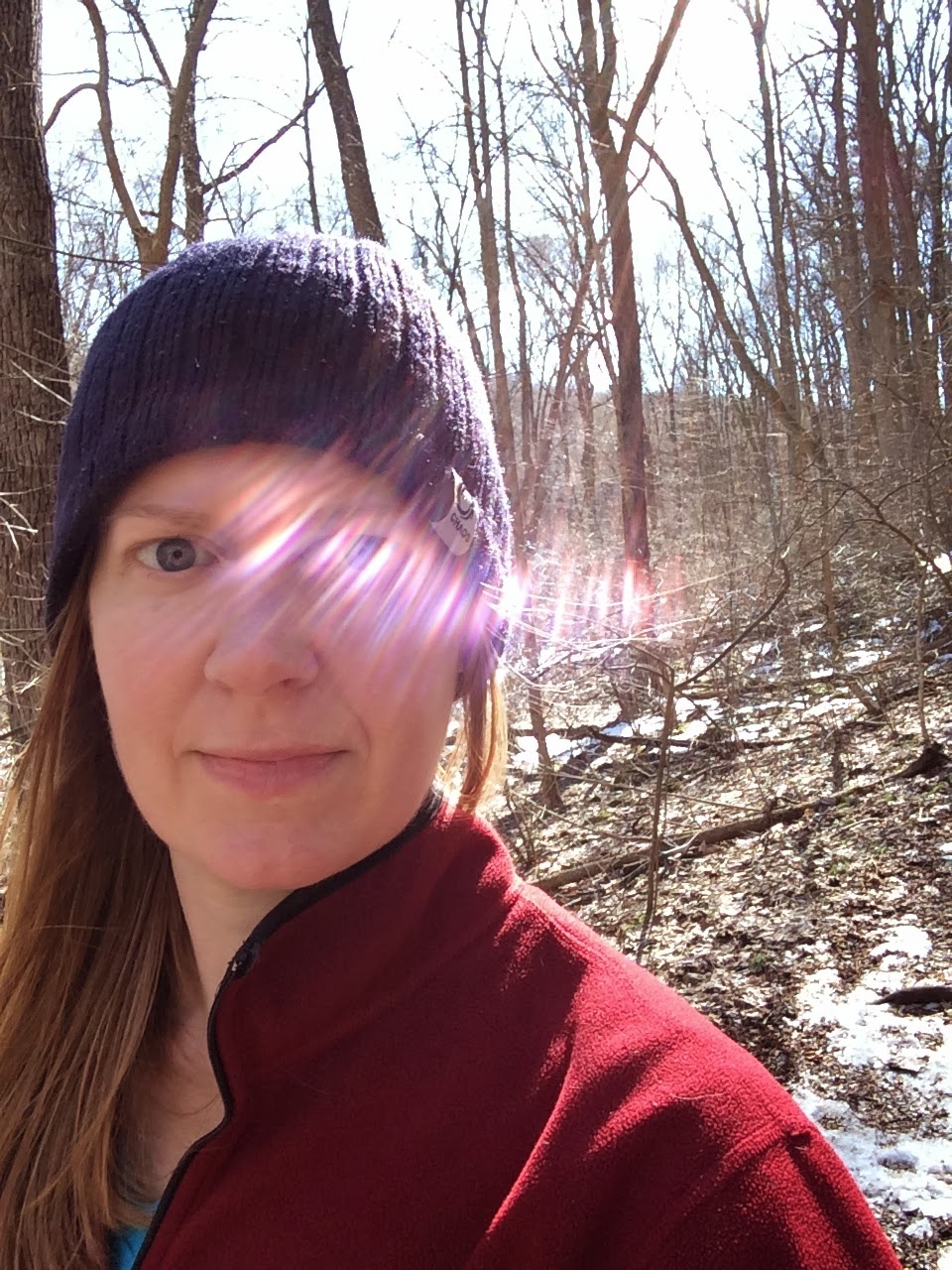 Note: Shenandoah was open by Saturday afternoon and hopefully will be for the rest of the season!
Posted by M Twiddy No comments:
Email ThisBlogThis!Share to TwitterShare to FacebookShare to Pinterest
Labels: Nature

This year's nominees for best live action short film are:

A prison psychiatrist faces off with an inmate who believes he is a god. 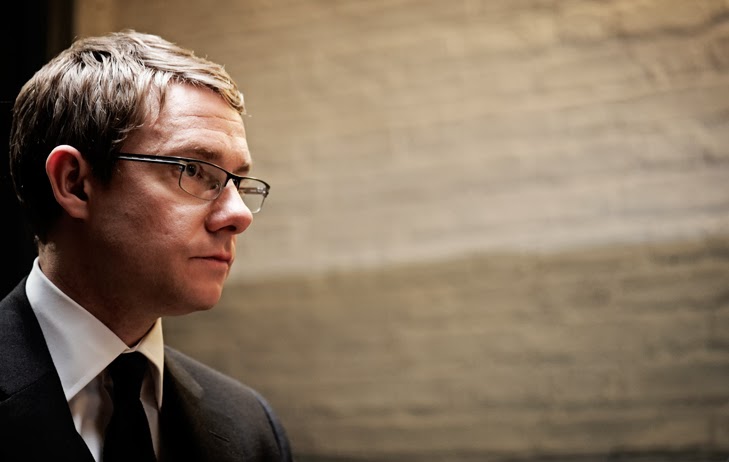 Pitääkö Mun Kaikki Hoitaa? (Do I Have to Take Care of Everything?) -- Selma Vilhunen and Kirsikka Saari
An amusing look at chaotic family life. 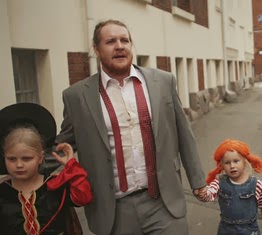 
A dying boy looks forward to traveling to Helium, a fantastical world described to him by his friend, the hospital janitor. 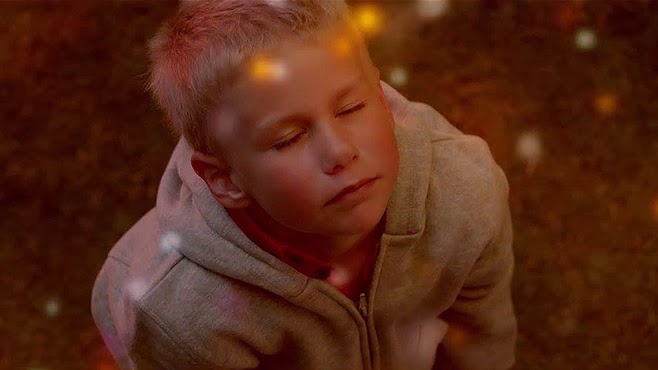 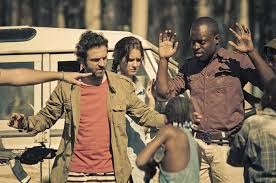 If you only have thirty minutes to spend watching a short film this year, make it Avant que de Tout Perdre (Just Before Losing Everything). The sound of high heels clicking on a tile floor may haunt your dreams.

Thank you The Charles Theater for screening Oscar shorts!
Posted by M Twiddy No comments:
Email ThisBlogThis!Share to TwitterShare to FacebookShare to Pinterest

The Walters Art Museum featured student art work from the Creative City Public Charter School in their main gallery last weekend.
Below are photos of one of the second grade projects and a few additional pieces.

It was a privelege to encounter the work of these talented students and teachers!
Posted by M Twiddy No comments:
Email ThisBlogThis!Share to TwitterShare to FacebookShare to Pinterest
Labels: Community

You took your rats to the park

You were a college student, living in a small, dilapidated apartment owned by an impersonal rental agency. There was black mold growing in the basement where you and your rommates kept your bikes. But the apartment was close-ish to school and your rent, after being split six ways, was only $550 a month. The one sticking point in taking the apartment was the NO PETS policy. You had all just moved out of the dorms and dreamed of having a cat or, better, a dog that you could feed beer to and play frisbee with in the park on sunny days, when you had time. Of all of your roommates, you thought about the pet policy the most. You missed your dog, Cuddles, back home.
It was Lars who, after a night of drinking, said, "Dav. You shood buy a rat pet for da howse. Dere sweed." He was from Finland and on the diving team.
"That is the best idea!" you said, and fell out of your chair.
Your other roommates volunteered that it was "the grossest idea" and proceeded to tell stories of rat's crawling up distant acquaintance's anuses.
"No really! It got stuck and he had to go to the hospital!"
"Only the tail was hanging out."
"Oh!"
"Ugh!"
"Not a true story! I don't believe you."
"It is true. My sister drove the guy to the hospital. I swear!"
"Just like my cousin's neighbor--"
Apparently every roommate knew someone who had had bungled anal rat sex.
You woke the next morning thinking of rats being taken on walks through the park, instead of rats tunneling through human colons and decided, by light of day, that Lars had still come up with the best idea. You got up and went to the local pet store.
Rats and their cages were cheap, you learned. A rat cost three dollars. You bought two. The cage cost ten dollars. Food for a month was less than a dollar. "The best idea," you repeated while paying the cashier.
When you got the rats home you told Lars immediately. He asked a few questions which made you aware that you didn't know anything about caring for rats.
At first the rats hid from you, but once they realized you were a sometimes feeder, they started coming to the side of the cage when you walked past. Their little rat noses twitched and sniffed for food.      Lars fed and handled them the most. He named them too. Yksi and Kaksi. You thought they were great Finnish names and continually asked Lars to help you pronounce the names correctly.
One weekend morning, after you had had the rats for a few months, you woke to fair weather. "Screw studying at the library!" you shouted. "Lars! Let's take Yksi and Kaksi to the park!"
"Okei," he said. Lars packed two lunches, and included a forty for himself, which he always drank in a paper bag, like he had seen  men do in American movies.
You put the rats in a bag and carried them to the park. They peed through the cloth and pooped where they stood.
Lars said, "Why not put them here." He pointed to your shoulder.
"I hadn't thought of it," you said. You realized then that you weren't the most attentive, thoughtful pet owner and maybe that's why so many landlords and rental agencies had NO PETS policies for college student renters.
When you arrived at the park, the sun was blazing. Lars let Yksi and Kaksi out of the bag. He swore in Finnish at the mess. Yksi and Kaksi immediately ran for cover under a tree. You followed them.
The rats spent the next several minutes digging worms, grubs, and beetles out of the ground. They sat back on their haunches and shoved their food into their mouths with their pink, delicate-looking front paws. They chomped and chewed greedily.
"Whoa! Whoa! Awesome! Kull!" Lars said.
It was exciting to see your animals eat other animals.
Munch, munch, munch. Yksi and Kaksi's eyes looked brighter as they ate.
You found a fat, green tobacco hornworm caterpillar and put it on the ground in front of them. Yksi grasped the caterpillar's head between his front paws and bit down. The caterpillar's head came right off and a green slime emerged from its body cavity.
"Whoa!" said Lars.
Yksi ate the whole caterpillar in five bites.
For the next two years you took Yksi and Kaksi to the park every weekend when the weather was fair. The ritual only ended when they died, exactly one week apart.
Lars still tells people the story of you and your rat pets. How the rats were his idea, but made you a better person. His English is much better now.
Posted by M Twiddy 1 comment:
Email ThisBlogThis!Share to TwitterShare to FacebookShare to Pinterest
Labels: short short

This year's nominees for best animated short film are:

Feral -- Daniel Sousa and Dan Golden
Haunting and absorbing, Feral is a hand-drawn animated short, a rendition of the wolf-child myth. Sousa draws humans as shadows without eyes or a mouth. The wolf-child communicates most frequently by baring his teeth. The most chilling moments are when the wolf-child begins to assimilate; he literally becomes what he has touched--a wooden door, a shadow human--and then he is gone. 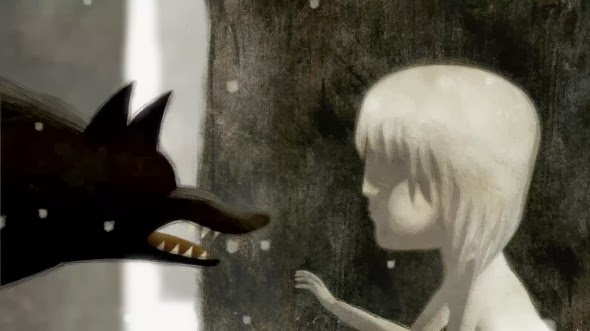 Get a Horse! -- Lauren MacMullan and Dorthy McKim
Mickey and Minnie rebooted. The famous mice, along with their friends and their nemesis, a lecherous cat, move back and forth in time through a movie screen. Old cartoon style. New cartoon style. If you saw Frozen you have already seen this short. 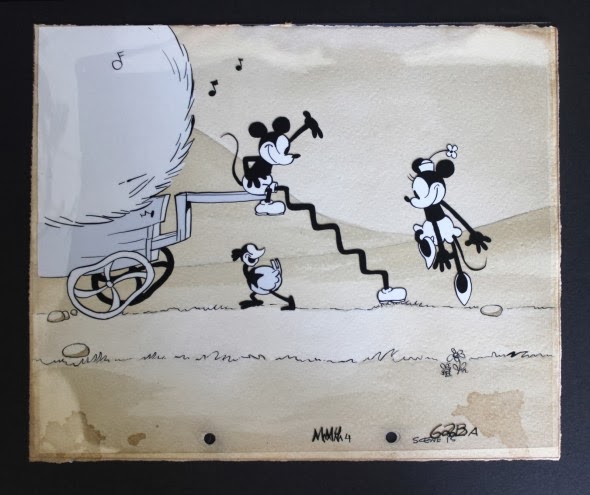 Mr. Hublot -- Laurent Witz and Alexandre Espigares
A stop-motion CGI mashup inspired by Stephane Halleux's sculptures. Each frame invites the viewer into an exquisitely detailed, steampunk future. Hours could be spent investigating every corner of the main character's house, the contraptions he uses, and the city he lives in. This is a sweet story about a lonely, futuristic man/machine and the dog/machine that he grows to love. 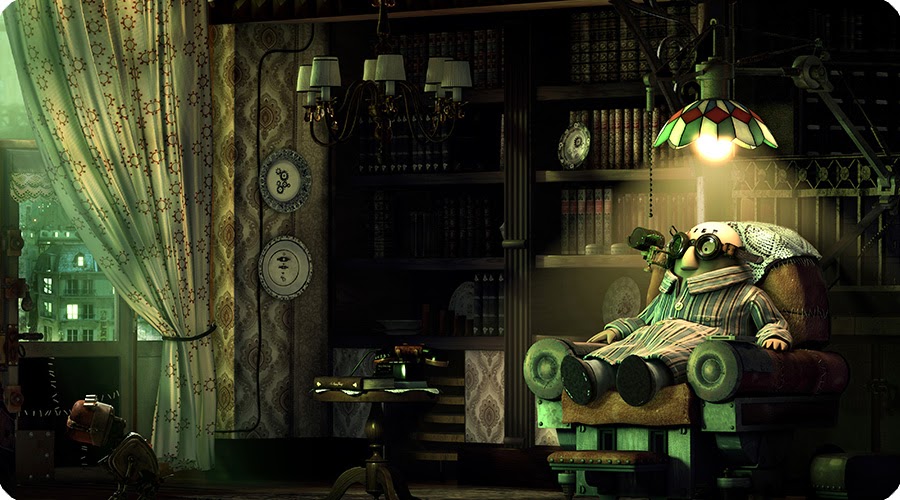 Possessions -- Shuhei Morita
We are told up front that old tools play tricks on people. A man enters a house to wait out a storm and is set upon by discarded umbrellas! I couldn't help thinking of my vacuum cleaner trundling through World of Warcraft. 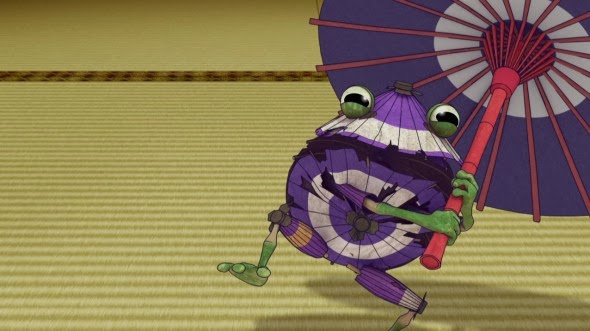 Room on the Broom -- Max Lang and Jan Lachauer
A children's story, narrated by Simon Pegg, about a witch and her animal companions who work together to overcome obstacles.  Based on a book written by Julia Donaldson and illustrated by Axel Scheffler, it has the same cozy look and feel as their Gruffalo series. Sally Hawkins is the voice of the bird. It is always good to hear her voice. 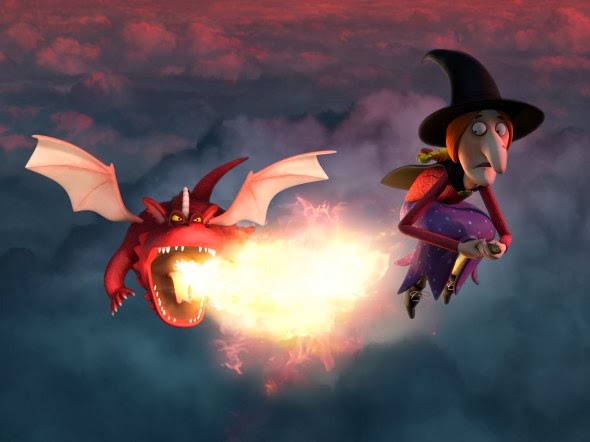 Two films that were not nominated for the Oscar, but are wonderful:
(1) A La Francaise a hilarious pairing of chickens and late 1700s, Louis XVI, extravagance!
http://vimeo.com/45503195 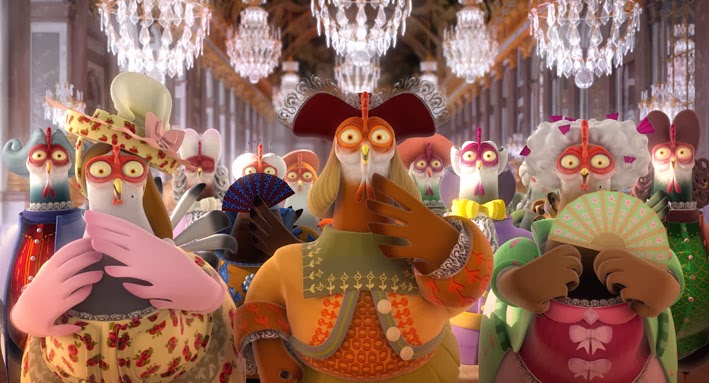 (2) The Missing Scarf a squirrel and his woodland friends discuss/try to solve their problems, our galaxy's problems, and the universe's problems. (narrated by George Takei!) 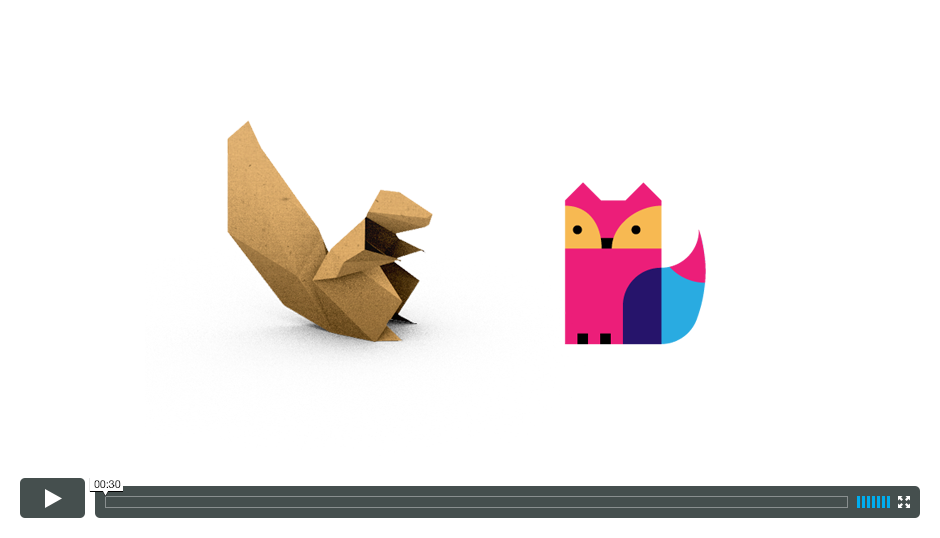