The PRS is an epistolary series inspired by The National Gallery of Art's Pre-Raphaelite exhibit and Pat Flynn. I hope you enjoy. And feel free to contribute by writing your own Sisterhood letters.

Part I: Amelia and Constance


Dearest Emily,
I know you're only two desks away, and probably working diligently on Mr. Hammersmith's graphic design project, but I couldn't concentrate and needed to write you. I hate all this minimalist crap Mr. Hammersmith is "teaching" us. I think we should do something else!

Last night, I was looking at these books my dad left out on the coffee table. They had pictures of like, hobbits in their holes, dead poets, gnomes, vampires, and knights and damsels. I was like, "Daddy? What is all this cool art? Why isn't Mr. Hammersmith teaching us how to do this?" My dad was busy and didn't answer me. But the point is, the pictures were really pure and beautiful. They reminded me of those Twilight movies you love. And I know the movies were based on books. I think you told me you've read other books like that?
Here's one of the paintings. I googled it. 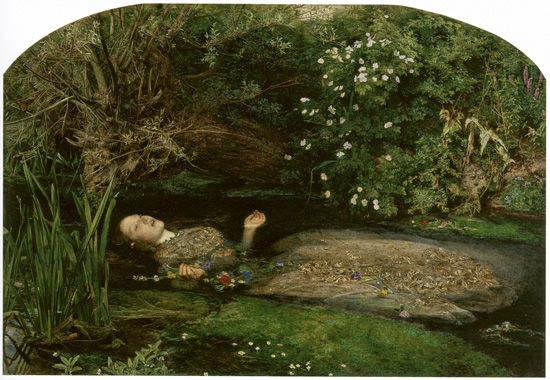 Isn't it the best!? It's called Ophelia. I guess she was a character in Hamlet. She's floating in mossy water. She's dead. She looks so haunted and tragic and real!!
Anyway, this is the kind of art I want to be famous for and I know you feel the same way. Aren't there enough two-toned movie posters out there already? What are we learning by making more? I say we revolt! We should tell Hammersmith we want to do an alternative painting assignment.
What do you say?
Your bestie, forever and always,
Katie

Dearest Katie,
Of course I'm working on the GDP. It's due next week and I've only executed five of the ten elements Hammersmith requires. I hate Adobe Illustrator. I long for the feel of a pen and nib in my hand...or even a paintbrush!

I have to tell you, I am intrigued by your idea. I would love to ask Hammersmith for an alternative assignment. I have been yearning to learn how to capture true beauty through art. I agree, that is not what Hammersmith is teaching us to do. I would like to scrutinize your father's books for more ideas. Why was he looking at paintings like Ophelia, I wonder?
The Ophelia painting, is gorgeous btw, truly beautiful. What vivid colors! (We read Hamlet last year. I can't believe you don't remember her character! But I know how you hate to read.)
So the long and the short answer to your question is...I'm in! But let me do some research...gather some evidence to convince Hammersmith to take us seriously.
Your bestest bestie, forever and always,
Emily

P.S. You are right, I love the Twilight novels and the LOTRs novels and most woodland fantasy novels. The movies are okay too.

Dearest Emily,
Hooray!  I knew I could count on you! I hate Adobe Illustrator too. I've only completed two elements... I desperately want to become a famous painter.

I will wait for you to do your research. Do you think you'll be able to complete it by the end of class? I would like to learn to paint right away. Maybe Mr. Hammersmith will let us take easels outside. We could sit under the oak tree in the quad, drink lemonade, and paint landscapes. Exciting!
To answer your question about my dad, he's looking for new design ideas. He told me that he's sick of these sleek designs that his underlings, and everyone in the Valley really, keep "improving" on. He was like, "I'm looking for the moss! We don't want to emulate Apple! We want to be different. We are different. We're like that! There! See? We're the moss!" I wasn't exactly sure what he meant, but the painting he was pointing to was breathtaking.
There are only five minutes left in class and Mr. Hammersmith is coming!
TTYL,
Katie

Dearest Katie,
I've hit gold! Ophelia was painted by one of the preeminent members of The Pre-Raphaelite Brotherhood. They are my/our new inspiration! I'll tell you all about them after we talk to Hammersmith, but briefly, they were a group of English painters, poets, and thinkers who revolutionized the art world in the late 19th century. They rose up against the establishment. They hated painters like Raphael, who they deemed the worst offender, calling his art "sloshy". They were really the first avant-garde artists! They believed in capturing beauty in all it's realism. They wanted to get back to nature, to Medieval and Gothic approaches to art. Nothing staged. Nothing faked. Nothing phony! It's everything that we've been talking about!

I'll take the lead with Hammersmith after class.
Read this quote from John Ruskin. It's amazing. He was an art critic during the late 19th century and the PRB's champion:
"Therefore all art which involves no reference to man is inferior or nugatory. And all art
which involves misconception of man, or base thought of him, is in that degree false and
base. Now the basest thought possible concerning him is, that he has no spiritual nature;
and the foolishest misunderstanding of him possible is, that he has or should have, no
animal nature. For his nature is nobly animal, nobly spiritual -- coherently and irrevocably
so; neither part of it may, but at its peril, expel, despise, or defy the other. All great art
confesses and worships both."
We have so much to do! The bell is about to ring. Like I said, leave Hammersmith to me. You are a genius!
Your dearest friend and sister in The Pre-Raphaelite Sisterhood,
Amelia

P.S. My new name is Amelia! I thought yours should be Constance! Great, right?!
P.P.S. We must go to the thrift shop after school and buy capes!
Posted by M Twiddy
Email ThisBlogThis!Share to TwitterShare to FacebookShare to Pinterest
Labels: PRS